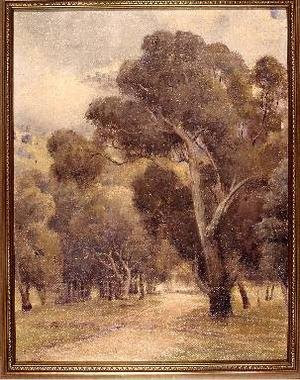 Thieves who stole a $25,000 painting from the Australian National University in Canberra disguised the theft by unbolting the plaque beneath the artwork and rubbing down the wooden veneer wall behind.

The 1928 oil on canvas by Tom Roberts, Road Near The Goulburn River, might have been missing since late April, but its disappearance was noticed only on June 19 after a routine audit of the collection. The university reported the theft to police on Wednesday.

At 56 centimetres by 45.5 centimetres, the painting was small enough to be hidden under a jacket. The thieves removed its bolts and took it from a function room where it was hanging with several less valuable paintings. The other works were untouched and the wall left looking as new.

"The disappearance of the painting has been carefully disguised," said the university's acting vice-chancellor, Lawrence Cram. "You would need to know it was there beforehand [to tell it was missing]."

The artworks were protected by little more than a locked door, but Professor Cram said it would be impractical to introduce surveillance cameras. "We do have quite a lot of precautions to make it difficult to remove the pieces of art, but we'll have to look at whether it's possible to continue leaving these pieces on display."

ACT police are appealing to the public for information.

But even art experts may not immediately recognise Road Near The Goulburn River as Roberts's work. The head curator of Australian art at the Art Gallery of NSW, Barry Pearce, said: "It doesn't jump out as an obvious, famous Roberts painting and that might make it more difficult for a buyer to trace it back to a collection and realise it is stolen."
Art Hostage comments:
Waiting for more information to filter through, reward offer, how much etc, and from the Underworld who is currently in possession of this fine work of art by Roberts, keep you posted..
Update:
Seems the thieves are Laughing at authorities in a Cavalier fashion !!!
Posted by Art Hostage at 5:50 pm