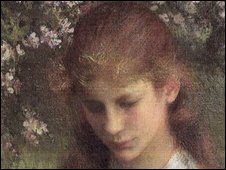 Woman is tied up in £2m robbery
http://news.bbc.co.uk/1/hi/england/somerset/7962080.stm
Fifteen works of art were among property worth £2m that was stolen when three masked men forced their way into a house in Somerset.

A 47-year-old woman was tied up by the gang in the raid and was not found until 1600 GMT the following day.

The robbery happened at a home close to Redlynch, near Bruton, on Friday, a police spokesman said.

He added that the woman suffered bruising and was left "extremely shaken and distressed".

They also stole some antiques, a safe containing jewellery and a green Mercedes 220.

Det Insp Jim Bigger said: "The size of the some of the items, and amount of property, stolen would suggest that a van or some other fairly sizeable vehicle would have been used."
£90,000 seized from jailed Bushey crook

Police officers seized more than £90,000 yesterday from a jailed crook and drug dealer.

Leslie Churchill, 58, of Cooks Mead, was jailed for six-and-a-half years in January for handling stolen artworks and dealing Class A drugs.

When officers raided his home they discovered not only three historic paintings but nearly £36,000 and 65,000 Euros in cash Officers appealing to St Albans Crown Court convinced a judge to order the seizure of the loot under the Misuse of Drugs Act.

Two of the paintings, identified as works John Thomas Serres (1821) and Frances Cotes' (1764) have been returned the national art collection and Somerset House.
Posted by Art Hostage at 7:53 pm