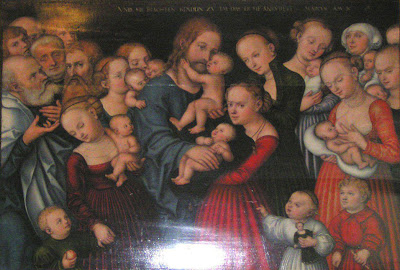 Police recover painting by German 15th-century master
http://www.earthtimes.org/articles/show/259570,police-recover-painting-by-german-15th-century-master.html
Oslo - Norwegian police Thursday continued investigations of a painting by German master Lucas Cranach The Elder, that was recovered on Wednesday after its theft over the weekend. The painting, worth at least 15 million kroner (2.1 million dollars), was stolen over the weekend from Larvik Church, some 105 kilometres southwest of Oslo.

Investigators were trying to secure possible DNA traces from the painting.

Police on Wednesday evening announced the recovery of the painting, hours after they said they had arrested a 51-year-old man on suspicion of involvement in the theft.

Police believe several people were involved in the theft of the painting, titled Let The Children Come To Me.

A Norwegian insurance company Tuesday posted a reward worth 500,000 kroner for information securing the safe return of the over 400-year-old painting.

However, detective Jorn Lier Horst told Norwegian news agency NTB that no reward would be paid since the recovery was the result "of good police work."

Church council chairman Ludvig Levinsen told local media that the congregation was extremely relieved that the painting was recovered so quickly.

The theft has sparked a debate on the need to improve security of valuable art in churches and other public buildings.

Cranach (1472-1553) was a German Renaissance painter who made several portraits of German theologian and church reformer Martin Luther. He also illustrated the Bible that Luther translated into German.
Art Hostage comments:
The Norwegian police reacted quickly having the nasty experience of the Scream thefts as a historical backdrop.
This quick recovery shows by collating information and utilising all resources stolen art can be recovered quite quickly after the initial theft.
If the first month goes by without any firm leads then a cat and mouse game commences, because it is within the first month the stolen art gets passed around before going deep into the Underworld. Then normally within the first year enquires are made as what is on offer for the return of the stolen art.
Posted by Art Hostage at 12:18 pm