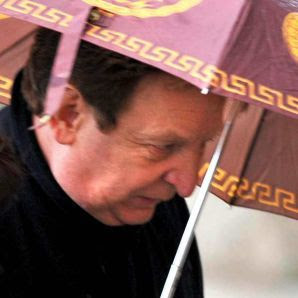 A CONMAN who duped an art dealer into buying a fake LS Lowry painting for £330,000 has been convicted of fraud.

Lord Maurice Taylor, who bought his title on the internet for £1,000, convinced four art experts that the 'Mill Street Scene' was an original oil painting by the Manchester artist.

He told Bonhams Auctioneers he had been given the painting by an industrialist in the late 1960s in payment for a debt.

After examining the painting they valued it at about £400,000.

Art dealer David Smith, managing director of Neptune Fine Arts, which specialises in Lowry, was also convinced of its authenticity and agreed to buy the painting for £330,000 at a meeting with Taylor in The Ritz hotel in London in 2007.

He later learned the 'Mill Street Scene' was a well known fake on the Manchester art scene and phoned the police.

Taylor, 60, had bought the painting, a depiction of a snowy northern industrial landscape with characteristic 'matchstick' figures, for £7,500 just three years before from another Manchester art dealer.

He then invented the story about its origin to fool the art world into believing it had provenance.

Taylor, who lives in a mansion near Congleton, Cheshire, was found guilty of six counts of fraud after a two-week trial at Chester Crown Court.

He was cleared of one count of doctoring a receipt.

Judge Roger Dutton said : "You have been revealed . . . as a fraud, a cheat and a thoroughly dishonest man.

"You will have to be dealt with for a whole series of very serious frauds from which you have benefited very substantially indeed.

"You have gained several hundreds of thousands of pounds out of your deception."

Judge Dutton said Taylor could expect to receive a 'substantial' prison sentence when he returned for sentencing on March 20, after pre-sentence reports had been compiled by the probation service.

He said: "There is a lot about your background I simply don't understand and I would like some help from the probation service because to my mind you are a bit of an enigma."

Taylor, who drives a Range Rover with the registration plate CLA55Y sometimes calls himself Lord Windsor. He bought his title on the internet, complete with an eight-square inch estate in Devon, in 2000 after making money through a cloth business.

The 'Mill Street Scene', complete with forged LS Lowry signature, was examined by two experts from Bonhams, the third largest auctioneers in the world, and two specialist art dealers.

They all believed it was genuine, and Bonhams gave Taylor a note allowing him to insure it for £600,000. That valuation, along with the painting and Taylor's story about being given the painting by Manchester industrialist Eddie Rossenfeld, convinced Mr Smith it was real, the court was told.

But, crucially, meetings to allow experts from The Lowry Centre at Salford Quays to examine the work were cancelled on three occasions.

Former head of galleries at The Lowry, Lindsay Brooks, told the court the painting was not a Lowry. She said by 1964, the date on the canvas, Lowry's style had evolved and questioned the red lampposts, the lack of fluidity in the middle distance and muddy skies.

Taylor had bought the painting from dealer Martin Heaps, through another dealer and friend Ivan Aird, whose father framed Lowry paintings.

Mr Heaps confirmed to the court he sold the work as an 'After Lowry'.

Taylor, who has an art collection at his home, maintained he believed the painting was genuine but admitted telling 'little white lies' about its history.

It was possibly painted in the 1960s by another Manchester artist, Arthur Delany, who was influenced by Lowry and was known to produce paintings in his style and sign them LS Lowry.
Art Hostage comments:
Comments to follow...................
Posted by Art Hostage at 4:29 pm

There are many thought processes relating to this case but the one thing which amazes me is the readiness to which the 'Lord' allowed himself to so be spectacularly scrutinized by the police and public knowing that he had previous convictions. How stupid is he to think that he could get away with scamming people. All the old fool had to do was pay back the money once the fake was revealed. Is he really so arrogant that he thought he could get away with it or just plain stupid. The moral of the story? Don't mess with intelligent people....... Idiotic to say the least.

I would have thought that the moral was "Be careful which dealers you buy expensive paintings from!"

Can someone explain how 'Lord' Taylor 'conned' Bonhams? Isn't it their job to spot a fake?