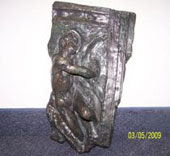 The two statues - a $3 million piece called "The Bronco Buster" by Frederic Remington and a $675,000 sculpture called "The Falling Man" by Auguste Rodin - were stolen from a Singer Island condo in the Tiara condominium building in 2006, according to a Riviera Beach police report.

The owner tried to find the thief on his own and just reported the crime to police on Feb. 26 of this year, said city spokeswoman Rose Anne Brown.

Riviera Beach police and Federal Bureau on Investigations agents investigated the thefts until a tip led them to a home in Palm Beach Gardens, Brown said. There they found both statues. The statues have been taken into police custody.

The home where the statues were found and its occupants were not identified by police. Nobody has been arrested, but Brown said police are still investigating and charges are pending. She would not disclose what the owners of the home told police about how they obtained the multi-million-dollar artwork.

One of the men was stealing on the spot, the other one allegedly organised the theft.

The police have also found four out of six stolen books, 18 out of 23 historical coins and most of jewels stolen.

Detectives did not rule out the possibility that some objects have already ended up abroad.

The two men, both of them unemployed with a criminal record, face up to 12 years in prison, if found guilty. They have been taken into custody.

Pavel Hochman, deputy head of the regional state attorney's office in Hradec Kralove, said if the total value of the objects stolen exceeded five million crowns, the perpetrators may face up to 15 yeas in prison, if found guilty.

Theft of valuable works of art is relatively rare in east Bohemia.