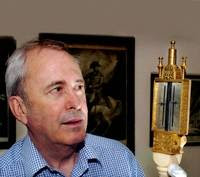 Pressure eases as stolen barometer returned
http://www.yorkshirepost.co.uk/news/Pressure-eases-as-stolen-barometer.5350428.jp
A RARE 300-year-old barometer is back at the finest Georgian townhouse in England after the thief who snatched it from display was arrested by police.
-
The historic barometer was returned to Fairfax House in York on Monday after a man who stole it appeared before the city's magistrates and admitted the theft.

Director of Fairfax House Peter Brown said the barometer, which dates from 1695, would be checked for damage by a conservator before being put back on display.

Mr Brown praised the North Yorkshire Police investigation which led to the return of the barometer, and confirmed a security review had been launched.

He said: "It is not in too bad a condition on the surface, but we are getting a conservator in to check. The barometer contains mercury and we are having that looked at and we are obviously going to upgrade our security."

The theft was only the second in the 25-year history of the museum, which is the home of the Noel Terry collection of English furniture and clocks. The exact value of the barometer has not been disclosed, although it is believed to be worth several tens of thousands of pounds.

Mr Brown said: "It is still distressing and there are lessons to be learned. We are just so pleased to have got it back. It is such an important part of the Noel Terry collection. It is one of a very small and unique group of barometers made by Daniel Quare."

The barometer was stolen by a visitor who was recorded on closed circuit television cameras at Fairfax House on May 18. He will be sentenced at York Crown Court in July.

Quare's customers included the Royal Family and his work can still be seen in Windsor Castle, the Science Museum and other high-profile venues.

Fairfax House, which was restored by York Civic Trust between 1982 and 1984, was created in 1762 as a dowry for Anne Fairfax, the only surviving chid of Viscount Fairfax.

Update: Woman quizzed over stolen antique
A woman has been arrested over the theft of an antique barometer from a historic house in North Yorkshire.
The £150,000 barometer, which was taken from Fairfax House in York in May, dates back to the 18th Century and is used to measure atmospheric pressure.
North Yorkshire Police said a 20-year-old woman from West Yorkshire had been arrested and was in custody.
The barometer was returned to Fairfax House this week after a 38-year-old man was charged with theft. He is due to appear at York Crown Court next month.
-
Art Hostage Comments:
-
Art Hostage will explain after the sentencing next Month........
Posted by Art Hostage at 5:52 pm