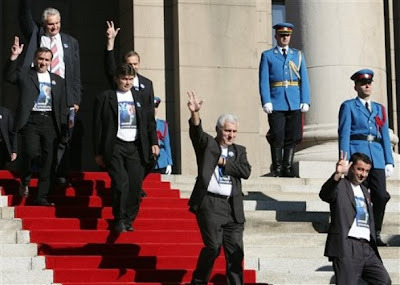 Police arrest 'Pink Panther'
http://www.news24.com/Content/World/News/1073/312fe3c057884fb4a9d31bcc0b9ffad7/15-06-2009%2004-06/Police_arrest_Pink_Panther__
Podgorica - A suspected member of a gang of jewel thieves dubbed the Pink Panthers, who is suspected of being involved in a series of daring robberies throughout the world, has been arrested in Montenegro, police said on Monday.

Vladimir Lekic was arrested on an Interpol warrant at his home in the Montenegrin town of Cetinje.

Police said Lekic was suspected of taking part in a robbery in Frankfurt, Germany, in December 2003, when watches worth about $1.4m were stolen from a jewellery store.

Lekic allegedly carried out the robbery together with two fellow Montenegrins, who are already in jail in France, police said.

The police statement said that Germany would allow Montenegro to try Lekic. Local laws in Montenegro do not allow for the extradition of Montenegrin citizens.

The Pink Panthers are believed to be mainly from countries in the Balkans. They are the prime suspects in a series of jewel thefts worth over $150m over the past decade in Europe, Asia and the Persian Gulf.

They are suspected of carrying out a robbery shortly before Christmas at the glamorous Harry Winston jewellery shop on one of Paris' fanciest streets. Thieves walked into the store and made off with jewels worth $108m.

Some Pink Panther members already are serving time in jail. Three Serbs were convicted in 2005 for a robbery in Japan, which included a necklace worth $27m.
Art Hostage Comments:
The main purpose of this arrest is to stop Vladimir Lekic travelling abroad to commit and organise further heists.
-
Also it is being used as a show of good faith to the Germans for their support in the EU membership application Montenegro submitted in April 2009.
It will be interesting to see how much jail time is handed out, if indeed there is a conviction in this case.
Those behind the curtain, including some leading SRS members, who direct the Pink Panthers, can order a stop to all Jewel and art heists if they feel the desire to do so.
Serbia & Montenegro within the EU will make the antics of the Pink Panthers a thing of the past, as the Pink Panthers will be stood down from jewel and art heists.
EU membership for Serbia & Montenegro and the following loans will be the pay off needed to put an end to the antics of the Pink Panthers.
-
Montenegro is taking the lead and will become an EU member leaving the Pink Panthers to retreat to their headquarters in Belgrade and elsewhere in Serbia.
-
When Serbia gets EU membership all Pink Panther activity will cease, for a time that is !!!!!
Posted by Art Hostage at 3:54 pm