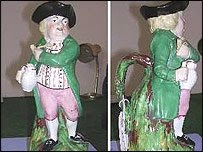 An Antiques dealer has been found guilty of conspiracy to handle stolen family heirlooms.

Phillip Capewell, 64, was one of three men caught with antiques stolen during a 3382,000 country house robbery.

Capewell was arrested after Christopher Doughty, 48, and Wolfgang Schmeltz, 57, arrived at his flat in Grand Avenue, Hove, on June 8, 2006.

They were carrying antiques, silver, swords and medals stolen four days earlier in a robbery at Aldsworth House, near Chichester.

Doughty and Schmeltz had driven from their homes in Southampton after Capewell agreed to buy some of the haul from them.

A jury at Hove Crown court yesterday found Capewell guilty by a majority of ten to one of conspiracy to handle the antiques knowing or believing them to be stolen.

Schmeltz and Doughty pleaded guilty to handling the antiques but deny being part of the masked gang that staged the Aldsworth House robbery.

Capewell has also been found guilty of handling antiques from four more country house raids across Sussex and the South East.

He has been cleared of handling charges after stolen antiques from three more burglaries were found at his lock up garages in Hove and Suffolk.

Capewell told the jury during the ten week trial that he bought them legitimately from other antiques dealers.

Motorway worker William Johnson, 47, from Southampton, was found not guilty of the robbery at Aldsworth House.

AN ANTIQUES dealer from Hove was found guilty of conspiring to handle stolen goods taken from an elderly couple during a violent robbery.

Philip Capewell (64) of Hove was convicted of conspiring with Wolfgang Schmelz and Christopher Doughty at Hove Crown Court on Monday (April 21).

Doughty and Schmelz, both of Southampton, pleaded guilty to the offence but both still stand accused of robbery.

William Johnson, also of Southampton, was charged with robbery alongside Schmelz and Doughty but was found not guilty by the jury last Friday (April 18).

During the trial, Capewell was cleared of conspiring with Daniel Brummer in handling a quantity of stolen goods including antiques taken from the robbery atAldsworth, near Emsworth. Brummer was acquitted of the offence.

Antiques were stolen from Thomas and Sarah Williams' house during the robbery between June 3 and June 9, 2006.

Mr and Mrs Williams were told they would have their fingernails taken off with pliers if they did not co-operate with the robbers.

On entering the house, the men hit Mr Williams over the head with a truncheon and then bound the couple by their ankles and wrists.

A gang took possessions worth £380,000 including medals, swords, guns silver and porcelain.

As well as taking the antiques, the men made off in the couple's dark blue Vauxhall Vectra.

Capewell was found guilty of four counts of handling stolen goods from other robberies and found not guilty for the same offence on four counts.

The jury is still deliberating on the verdicts for Doughty and Schmelz for robbery. The trial continues.
Posted by Art Hostage at 6:18 pm