Stolen Art Watch, For the Truth, Call Their Bluff !! 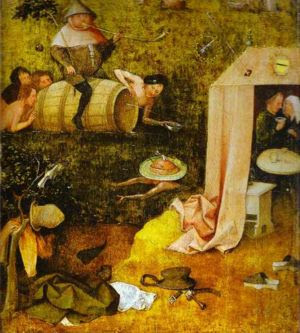 Allegory of Gluttony and Lust, we'll call it a Michael Marks/Robin Symes moment !! Art Loss Register react to concern over ‘sting’ tactics
http://www.antiquestradegazette.com/news/6643.aspx
The Art Loss Register (ALR) have defended their decision to mislead Kent dealer Michael Marks in the Souza paintings case after members of the trade expressed strong concern at the agency’s actions.

In a statement to ATG, ALR chairman Julian Radcliffe says it was the “extraordinary circumstances” of this particular case that led to the decision not to inform Mr Marks that the paintings he enquired about at the ALR were known to be the subject of an ownership dispute.

Mr Radcliffe points out that the circumstances were so extraordinary that it was only the second time in 15 years and five million provenance searches that it had been deemed necessary to mislead an enquirer.

The ALR’s decision to mislead Mr Marks emerged during the High Court dispute between Mr Marks and the art collector Aziz Kurtha over the ownership of two paintings by Francis Newton Souza (1924-2002), valued at £300,000, that went missing from Dr Kurtha’s collection while in storage.

Although Mr Justice Tugendhat states that he does not set out the ALR’s reasons in the judgment, Mr Radcliffe says that the decision to mislead Mr Marks is fully explained in paragraphs 74-79, which detail the exchanges between Mr Marks and the ALR and how the latter’s suspicions were aroused by the urgency of the calls and other factors.

Mr Radcliffe’s more detailed explanation of the ALR’s actions comes in the wake of strong concern and criticism. Sandy Cooke, a dealer of Long Melford in Suffolk, was appalled at what he saw as the ALR’s attempt at an “entrapment sting”.

He called on Mr Radcliffe to resign, saying: “How can anybody now go to the Art Loss Register and get a truthful and honest answer to the question: ‘Is this picture unencumbered for me to proceed to purchase it?’”. That concern was echoed by art market commentator Tom Flynn who in a letter to ATG questioned whether an organisation that had a commercial interest in the recovery of stolen property was a suitable arbiter of due diligence.

LAPADA, the antiques dealers association, also expressed concern, but have since declared themselves satisfied by Mr Radcliffe’s explanation.

In the meantime, Mr Marks has written to ATG, criticising our coverage, taking issue with the High Court judgment and attacking the ALR.

It was the judgment’s detailing of what happened when Mr Marks contacted the ALR that caused much controversy when it came to light in a report in ATG No 1832, March 22. The judgment explained that Mr Marks phoned the ALR in order to check the provenance and title of Francis Newton Souza’Still Life with Chalice with Host (1953) and Head of a Portuguese Navigator (1961).

He was told there was no problem with the title of the two paintings, although, in fact, there was. Mr Radcliffe told ATG that he misled Mr Marks as he was attempting to keep lines of communication open in a bid to recover the works.

The judgment further explains: “There were features of Mr Marks’ telephone calls which were unusual from the point of view of the ALR, and caused those at the ALR to pay particular attention to his requests.”

Mr Marks disagrees with the judge’s view that his paperwork was inadequate: “The suggestion is that I had little or no documentation as to my purchase of these two paintings, whereas, in fact, I obtained a signed receipt and invoice from the dealer I bought them from on the day I collected them and paid the deposit.”

He believes the judge was more concerned “that I paid a deposit for the paintings in cash. It would seem that in these days of ever-growing fears over money laundering, the coin of the realm is now not a ‘proper’ way to conduct business”.

Mr Marks reserves particular criticism for the ALR, who he blames for much of the predicament he later found himself in. He dismisses their decision to mislead him in order to keep lines of communication open as unnecessary: “They had every detail of my business before they were asked to do the search, so any idea that I was going to run away and hide if he [Julian Radcliffe] had told me the truth was absolutely ridiculous.”

But Mr Radcliffe says that on both occasions when the ALR has had to mislead the enquirer, “our decision was justified by the information we already had”. In the former, unconnected case, he said that the decision was further justified because it led to “a lawyer’s arrest and the recovery of $1m of pictures”.

He also sets out to reassure ALR subscribers, stating that: “Bona Fide clients of the Register can search without fearing that they will be misled. The far greater risk arises if they do not search and become involved in trying to sell stolen art.”

His explanation has persuaded LAPADA chief executive Sarah Percy-Davis, who told ATG: “We initially expressed concern about a dealer being misled, but with these exceptional circumstances we now feel satisfied to recommend our members that use the ALR for their due diligence to continue to do so.”

Mr Marks is not persuaded, however: “This has been a very painful, and expensive experience, which will probably cost me my business, and a reputation which has taken 30 years of hard work to build up, and the laughable thing is that if I hadn’t contacted the ALR at all, and simply bought and sold these paintings, I would now be blissfully ignorant of the workings of the great British ‘Justice’ system, and sitting counting my profits.”

He concludes: “I will happily stand judged by my peers who, having read this, may well think ‘there, but by the grace of God…’”
Art Hostage comments:
First of all I don't blame Julian Radcliffe for trying to hoodwink Marks so that the Art Loss Register could profit from the recovery.
The whole area of stolen art recovery is Grey to say the least.
Mr Marks however, has only himself to blame for being naive.
What Marks should have done is to accept the initial Art Loss Register clean bill of health, asked for it in writing, and then called their bluff by saying he was going to sell the painting within a week to a very private collector.
Now, faced with being party to the sale of stolen art, the Art Loss Register would be forced to come clean to Mr Marks, otherwise they too would be in the frame, so to speak.
If, as I suspect, Mr Marks knew full well the status of the two stolen paintings were doggy, then he deserves everything subsequent.
Come on, Art Hostage knows, he was there for two decades, the term Honest Art and Antiques Dealer is an Oxy Moron of the highest order. Dishonesty runs right through the art and antiques trade like a historic chalk line.
From the supposed honest dealer who never reveals the true mark up on his art and antiques, up to seven, eight times price paid, to the burglar, dishonesty is the by-word for the Art and Antiques trade.
Of course Mr Marks knew there were problems with these paintings, price told him that.
If everything was clear and lawful the price would not have been so low.
Even burglars know the true trade prices so it is price that tells the dealer if an artwork is stolen or not.
Enough already with the hiding behind the cloak of respectability, historically, criminals, Art and Antiques dealers in particular, crave respectability when they become successful, therefore Mr Marks cry's foul from his Ivory Tower.
What is not revealed and what several high profile art dealers have conveyed to Art Hostage is Mr Marks has not been adverse to buying and selling stolen art and antiques over the years by using the "Blind Eye trick" a bit like Gays in the military, don't ask, don't tell, so if the said artwork comes up stolen the likes of Mr Marks can inform on the seller. These folks want it all ways. Again, price tells you if an artwork is stolen.
Sorry, how much was Mr Marks going to mark up the stolen paintings ??
You can't kid a kidder Mr Marks, Art Hostage, during his criminal career was not only one step ahead, but a whole Zip Code !!
You see this would not have happened to Art Hostage during his Deliciously Dishonest era, because when Julian Radcliffe said the paintings were not listed as stolen, Art Hostage would have called his bluff thereby revealing the true status.
Julian, I am right yeah !! this Marks guy knew the paintings were stolen and got caught out because his lack of cunning, and you managed to hook him because of his sheer greed !!
No good crying now Mr Marks, you came unstuck through your own blind greed that led you to the Art Loss Slaughter like a meek Lamb.
Memo to those wanting to use the Art Loss Register:
If you get a clean bill of health from the Art Loss Register and you want to test it out, tell them you intend to sell the said artwork in a week to a very private collector, quoting the Art Loss Register clean bill of health, this will soon call their bluff and you will certainly be notified of the true status within hours !!
As for cash dealings, there is no excuse if the deal is lawful to use cash.
Cash is only used in today's world by those seeking to hide the purchase or sale, be it from the Police, Customs or the taxman.
The Judge was correct in his assessment of those who deal in cash leave themselves open to loss of money and Liberty in some cases.
Cash dealings in 2008 represent dishonest dealings, get used to it and face the consequences if caught !!
So, today's side swipe goes to the Art and Antiques Dealers, rotten to the core !!
Anyone think a Seven fold mark up is fair for retail art and antiques ?
Alternatively, this could be a morally repugnant symptom of a morally repugnant antiquated trade.
Posted by Art Hostage at 4:02 pm

radcliffe is a fraud.
the man cannot tell the truth
everyone in the art and insurance world know
this. why does this man get any press?

Michael Marks is a Fraudster. Everyone in the trade knows this. Now he is back to making 20thcentury antiques. Well done 20thcenturymarks!