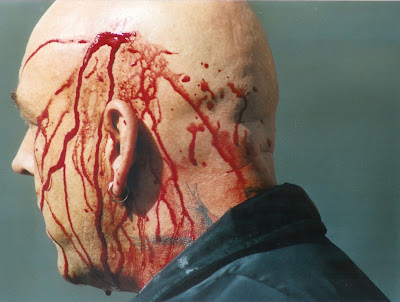 ..& gangster boss he double-crossed is not best pleased

One of the robbers in the Graff diamond heist is on the run with HALF the £40million haul.

But the fugitive - known as "Tim Slim But Dim" - doesn't have just the police to worry about. In fact, they may be the least of his worries.

The double-crossing crook is also being hunted by the mastermind behind the raid, who was expecting to claim a £1.2million diamond encrusted Bulgari watch for himself.

When the robbers fled the jeweller's in London's Mayfair after Britain's biggest shop raid, they were clutching two bags, each holding jewellery worth around £20million.

Both were supposed to be handed over to the mastermind - a 52-year-old East End Mr Big, who has links to Russian warlords.

One of the bags was safely dispatched to his hideout. But "Tim" fled with the other one.

The gang's hunt for the missing loot echoes the storyline of Guy Ritchie's 2000 film Snatch when London gangsters frantically search for a stolen diamond.

Last night an underworld source said: "The gang have been betrayed by one of their own and the gang leader is furious.

"He has told his crew to find this traitor at all costs.

"They think the guy is bound to be hiding abroad and fear he is biding his time to try to move on the jewellery and make millions.

"But if he manages to do it he will have to hide away for the rest of his life."

The source added: "The gang leader has connections with Russian criminals who have been promised a share of the loot so he is frantically trying to make sure it's returned.

"But what has angered the man at the top the most is that Tim fled with the watch. He collects watches and it was supposed to be his present for setting up and planning the raid."

Dramatic CCTV footage captured the moment the two robbers - wearing facial disguises - calmly walked into Graff's and carried out the raid on August 6.

It sparked a huge police hunt and so far six men have been charged.

Police arrested a 24-year-old man in connection with the robbery on Friday. Six other men have been arrested and face charges related to the robbery.

Police believe up to a dozen men were involved in the raid in which 43 items of jewellery were stolen and shots fired into the ground.

A senior police source said: "There are people out there who were involved and we are confident of tracking them down."

Had expected to claim a £1.2m diamond Bulgari watch for his own collection
Posted by Art Hostage at 2:05 pm