Stolen Art Watch, Sweden Cash Heist, Helicopter Should Have Been Burnt Out, Culprits Should Have Fled Sweden !!!! Serbia,Montenegro Connection !!!!!! 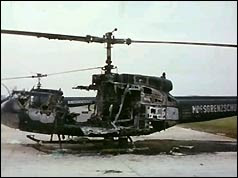 Pilot, 3 others, arrested in wake of daring Swedish heist

Stockholm - A 34-year-old pilot was one of four men arrested Sunday by Swedish police in connection with a spectacular cash heist earlier in the week in which thieves used a helicopter to raid a security firm in Stockholm.

The four were arrested in early morning raids around Stockholm.

Criminals used a stolen helicopter and explosives in the early morning raid on Wednesday at the G4S cash depot in the suburb of Vastberga.

They escaped with an undisclosed amount of cash, having given themselves a headstart by planting a fake bomb near the police helicopter that would have been used in any pursuit.

The criminals' helicopter was later found abandoned in a field north of the Swedish capital.

G4S has offered a reward of 1 million dollars for information leading to arrests. However, police spokesman Arne Andersson said the award would not be paid out if the men arrested Sunday turn out to be the criminals, as they were tracked down using investigative methods, not tips.

Aviation experts said the pilot who flew the helicopter was likely very skilled, citing the pre-dawn flight to the depot building and the location of landing site close to high trees.
-
Attorney Leif Silbersky has been appointed to defend one of the men arrested on Sunday.
-
“He asked to have me as his lawyer. I’ve met him and we’ve had a long set of negotiations.
-
Now I’m waiting for the police to interrogate my client,” Silbersky told TT.
-
According to Silbersky, his client is a Swedish citizen and he denies any involvement in the helicopter robbery.
-
According to the Dagens Nyheter (DN) newspaper, Silbersky’s client is one of 552 people registered with the Swedish Transport Agency (Transportstyrelsen) as having a licence to operate a helicopter and is s resident of the Roslagen region north of Stockholm.
-
The helicopter which was used in the heist was stolen from a Roslagens helikopterflyg AB, a helicopter training company based in the region.
-
One of the owners of the company said that the theft would have required familiarity with the area.
-
In August of this year, the 34-year-old suspect was convicted by the Stockholm District Court for a number of drug-related crimes. He confessed and was fined the equivalent of 110 days’ pay.

All are suspected of aggravated robbery for their role in the Hollywood-style robbery at the G4S cash depot in Västberga south of Stockholm early Wednesday morning.

A 21-year-old man from Bagarmossen has also been taken into custody on suspicions of being an accessory to grand robbery, according to documents submitted to the Södertorn District Court.

The 34-year-old suspect is a former student of Roslagen Helikopterflyg, a Swedish helicopter training academy in Norrtälje, north of Stockholm.

“He completed his education here around fifteen years ago, but he has never worked for us,” said head instructor Christer Öhlund to the TT news agency.

According to Öhlund, the 34-year-old only attained a private flying certificate. He does not have certification to fly as a professional pilot.

The man has had regular contact with the training academy, routinely hiring a helicopter for private flights. The last time he did so was in summer of this year.

According to flight instructor, the school was planning to hire the suspect as a photographer for the company, but the plans were never carried out.

Öhlund was shocked to discover that the man was being held on suspicions of involvement in the robbery.

“I don't think he's guilty. I can't imagine that he could have done this. He's just too nice and personable to have carried out such a thing,” he said.

Attorney Leif Silbersky is defending the 34-year-old and hinted at how his client was feeling following his arrest.

“A person never feels good when they are arrested and consider themselves to be completely innocent,” he said.

Interrogations have been held for the suspects, according to the National Police Board (Rikspolisstyrelsen).

The Swedish police remain tight-lipped regarding any additional information, and refuse to reveal whether the suspect knew one another before the robbery was carried out.

District prosecutor Leif Görts is due to announce on Wednesday at noon whether he plans to request that the suspects be remanded in custody.
-
Serbia and Montenegro Connection
-
Officials: Serbs took part in Sweden chopper heist
-
BELGRADE, Serbia -- Former Serb paramilitaries took part in last week's brazen helicopter raid of a cash depot in Stockholm, Serbian police officials said Monday.
-
Former members of the "Red Berets" paramilitary unit who fought wars in former Yugoslavia in the 1990s took part in the heist, along with Swedish robbers, said Interior Minister Ivica Dacic, who heads Serbia's police.
-
Serbian police "handed certain information about a criminal group which was preparing a robbery" in Stockholm to the Swedish embassy in Belgrade a month ago, but Swedish authorities did not react or contact Belgrade after that, said Milorad Veljovic, a senior Serbian police official.
-
Swedish police had been forewarned by counterparts in Serbia about plans to rob a Stockholm cash depot, according to media reports. Six people have been taken into custody for their suspected involvement in the crime.
-
Serbian police told the Aftonbladet newspaper they aware of plans to rob the Västberga cash depot and alerted Swedish police that a coup was imminent.
-
"We gave them everything that was needed to stop the robbery," Serbian Chief of Police, Milorad Veljovic, told the newspaper.
-
"We really did everything in our power short of going to Sweden and stopping the robbery ourselves."
-
A police source confirmed for TT that Swedish police had received a tip regarding the planned robbery from the Serbian police, but rejected the assumption that they had neglected the information.
-
According to the information provided, the robbery was due to take place a week earlier.
-
At that time Swedish police were closely monitoring the robbers in an operation referred to as KKP 4.
-
The operation entailed monitoring a number of different cash depots and temporarily moving police helicopters from the police heliport at Myttinge on Värmdo to another location.
-
"But because nothing happened, the operation was called off.
-
Then it happened anyway, only later on," the source said.
-
Police helicopters at the Myttinge heliport were subsequently unable to respond when the robbery took place on Wednesday morning of last week because of fake bomb had been placed near the hangar.On Sunday, Swedish police took a total of six people into custody for their suspected involvement the robbery
-
Background on the Six in Custody:
-
Male, 34-years-old: Dubbed 'The TV Man' by the Swedish media, he lives in a villa in the Roslagen archipelago with his wife and two young children. According to Metro newspaper, the man is widely recognized in Swedish media circles, having participated in several large television productions including 'Expedition Robinson', 'Idol' and TV4's 'Kändisdjungeln' (Celebrity Jungle). The 34-year old is a licensed helicopter pilot and is believed to have flown the helicopter during the robbery. He has a history of narcotics-related convictions (cocaine), as well as a weapons infraction. According to an unconfirmed report by Dagens Nyheter, the man has certain connections to security company G4S and may have been threatened into participating in the crime.
-
Male, 31-years-old: Referred to as 'The Martial Artist' in the press, he is a recognized martial arts competitor and was recently placed on the police's Nova list of the 150 most criminally active individuals in Sweden. He was convicted in September last year on charges of assault for head-butting someone during a dispute over a parking place. His trainer has also been remanded in custody for his suspected participation in an Umeå robbery in May of this year.
-
Male, 29-years-old: Grew up south of Stockholm, Serbian background. Convicted for stealing an emerald worth around 100,000 kronor in the year 2000. According to Metro newspaper, the man is married with no children and a resident of Botkyrka in southern Stockholm.
-
Male, 38-years-old: Grew up south of Stockholm, Serbian background. No convictions. According to unconfirmed reports, the man belonged to a criminal youth network known as the 'Fittja Boys' who operated in Botkyrka during the 80's and 90's. The 38-year-old is acquainted with a suspected mafia boss from the former Yugoslavia, and with the 36-year-old man also suspected of participating in the helicopter robbery.
-
Male, 36-years-old: Raised in southern Stockholm, Turkish background. The man was also involved with the 'Fittja Boys', but has no prior convictions. He is also thought to be connected to the man suspected of masterminding the robbery.
-
Male, 21-years-old: Convicted of several crimes including theft, assault, obstructions of justice, illegal threats and narcotics crimes. Has been drug free during periods of his teenage life. Denies any involvement or knowledge of the crime.
-
Art Hostage Comments:
-
Milorad Veljovic need not worry, I am certain he will be rewarded very well for his efforts in telling Swedish Police the robbery was going to happen a week earlier, which caused the Swedish Police helicopters to be spaced out !!!!
-
It's amazing that such a well thought out heist falls because those responsible did not burn out the Helicopter or getaway vehicles.
-
Professional Criminals would remember to leave open the windows for Oxygen to circulate, otherwise the fire will splutter and go out.
-
Furthermore, an essential ingredient in any heist must be the culprits leave the country immediately after the heist.
-
Staying around thinking they can ride out the storm cost Mickey McAvoy 25 years and means the Kent cash robbers are serving long jail sentences, not forgetting the alleged Graff robbers who are now in jail awaiting trial.
Posted by Art Hostage at 5:52 pm