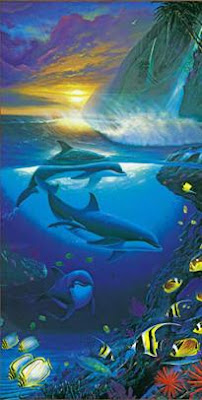 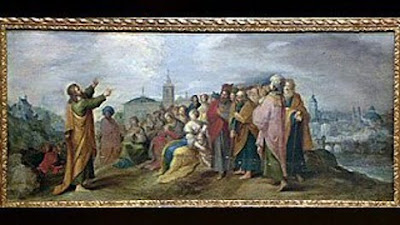 Internationally known artist Robert Wyland is asking for the public's help in getting one of his most prized paintings back.

The painting, valued at nearly $700,000 was stolen from "Wyland Galleries at Waikiki Beach Walk" around 7:20 Sunday night.

The gallery director says it's one of the gallery's most valuable paintings.

Witness Nicole Mokiao had a weird feeling when she saw a beat up truck pass her hostess stand twice Sunday night.

Soon after, her manager, who was on a break, came running towards her.

"Basically he seen everything. He seen the guy take the painting down from the wall. He seen him put it inside the truck, he said he didn't put it gingerly in the truck he just kind of threw it and left," she said.

The painting titled "Dolphin Dawn" is a published original that Wyland painted for the millennium.

And it was huge, four feet by six feet.

The painting was hanging at the entrance of the gallery.

The guy came in he had to go over our table, and lift a four foot by six foot painting framed in the koa wood solid koa lift it up and get it in the truck. And then drive away so it was pretty bold and brazen," said Iris Katsura, the gallery's director.

Mokiao says a woman was driving the truck. "She was a local lady, heavy set really kinky ehu color hair, the guy was, local guy had a mustache, had tinge of gray in his mustache, I seen missing teeth. He was wearing a black t-shirt."

She also got a good look at the truck, which has license plate number: 6-6-8 Q-something-C. "It was a GMC truck late 80's early 90's, it was a bluish teal truck it had black patches on it I wasn't sure if the paint was pealing or if it was spray painted," Mokiao said.

"The president of our company spoke to Wyland (Monday) morning and he's very saddened by the whole thing he just wants the painting back," saud Katsura.

Wyland is offering a $2,000 cash reward, or an original brush stroke painting for information leading to the safe return of the stolen painting.

If you have any information, call Wyland Galleries in Waikiki or Honolulu police

THIEVES made off with a £4,500 haul of antique furniture after a raid on a house in Dummer.

Between Sunday, August 30 and Tuesday, September 1, burglars broke a window to enter an isolated house in the north Hampshire village before stealing the antiques.

Detectives are now trying to trace the furniture, which includes a 19th century mahogany military campaign chest of drawers, a George I walnut chest of drawers and a mahogany coffee table with a red leather top.

PC Ewan Gardner, from the Basingstoke Priority Crime Unit, said: “The pieces are highly individual items, and the thieves left behind a drawer for one of the items, making it even more memorable.

“A large vehicle would have been needed to move the furniture and I would like to hear from anyone who witnessed anything unusual over the bank holiday, or anyone who has been offered similar items for sale.”

Anyone with information can contact PC Gardner at Basingstoke police station on 101 or call Crimestoppers on 0800 555 111.

Bavarian police said on Monday they had confiscated a valuable painting likely stolen by the Nazis after it turned up on an antiques appraisal TV show.

After calling for witnesses to reveal the owner, the authorities decided to confiscate the painting from an elderly Munich resident.

Two days after they sought help from the public to locate the 17th-century painting by Flemish artist Frans Francken the Younger, a 67-year-old relative of the painting's owner called investigators on Friday to say it was hanging in her relative’s Westend district apartment. She told police she had seen the police appeal in a regional newspaper.

“We’re not sure if we’ll be able to question the owner,” Munich police spokesperson Ludwig Waldinger told The Local. “She’s very ill in the hospital and she’s 93-years-old.”

Police secured the painting on Friday, and it will remain in Munich police custody while investigators try to piece together what happened to the 1606 painting after it was likely looted from Adolf Hitler’s Munich reception building, the Führerbau, as American troops approached near the end of World War II.

It was in this building that the Nazis had amassed some 723 paintings gathered by the Sonderauftrag Linz, an organisation formed by Hitler to collect art for his planned Führermuseum in his hometown of Linz, Austria. Some 650 of these paintings, gathered by Dresden State Art Collections, went missing when the Nazis fled.

The last physical evidence of the painting’s origin shows that it belonged to a French family and was purchased on October 14, 1943 by a Dresden art dealer, Waldinger said. It is now worth an estimated €100,000.

Initial reports said that the painting’s owner may have been Jewish, but Waldinger said police are now unsure of their background.

“There are still so many questions,” he told The Local.

Initial police investigation has revealed that the 93-year-old owner’s parents gave her the painting, entitled “The Sermon on the Mount (Paul in Lystra).” A male relative of the owner submitted the painting to broadcaster Bayrischer Rundfunk’s show Kunst und Krempel, or “Art and Junk,” for appraisal on November 15, 2008. He died in June 2009, Waldinger said.

An art expert saw the 33 by 79.5-centimetre painting on the “Antiques Roadshow” style programme and suspected it might have been stolen, but didn’t call police until six months later to explain his research.

The show asserted its journalistic right to protect its sources, forcing Munich police to go public with their search.

If they find the painting belonged to Adolf Hitler himself, the Bavarian Finance Ministry will take the next steps to find the painting a home, Waldinger said. If its rightful owner was another individual, the federal government will take on the project of restitution, he added.
-
Art Hostage Comments;
-
Wyland painting found in Chinatown after Police directed to its location.
-
No arrests, as yet !!!!
Posted by Art Hostage at 3:59 pm

CHECK OUT THE NEW BOOK : "The Monuments Men" : Allied Heroes, Nazi Thieves, and the Greatest Treasure Hunt In History By Robert Edsel. Mr. Edsel has produced a true gem by revealing this little known story about the Monuments Men to the world. The Monuments Men are an important element of art history of the era. Edsel truly honors the Monuments Men by preserving their stories in this book. The author is a gifted story teller that helps give each Monument Man (or woman) a distinct personality and character. This book gives a more in depth understanding of what the Monuments Men endured, continuing from the first book, Rescuing Da Vinci. The book is facinating and hard to put down. Robert Edsel is a true American hero.