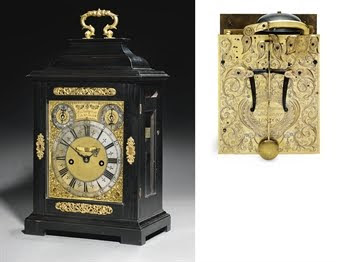 http://www.thewestmorlandgazette.co.uk/news/4639076.__200_000_antique_stolen_from_historic_South_Lakeland_hall/
AN IMPORTANT artefact worth an estimated £200,000 plus has been stolen from Levens Hall, near Kendal.

The Thomas Tompion ebony quarter repeating table clock was stolen at around 5am yesterday morning (Saturday).

The offenders gained access to the stately home by breaking into an outbuilding at the opposite side of the A6 and stealing a ladder.

They then scaled the perimeter of the hall and entered the building through a first floor window, setting off the audible alarm in the process.

After removing the timepiece, the men made off on foot along the A6.

The timepiece was damaged during the incident, with one of its four feet left at the scene of the crime.

Cumbria Police believe there were at least two offenders behind the incident and would like to speak to anyone who saw any suspicious people or vehicles in the area at the time.

Because of the high profile of this Tompion clock, this theft should be treated as a kidnapping and any notion the thieves will be rewarded should be dispelled.

If there are CCTV pictures then this should have a happy ending shortly.

The likelihood is the theft was carried out by relative locals and the window of opportunity to make a quick recovery is about four weeks.

Once the clock has changed hands into the underworld the demands will become unachievable and anyone trying to negotiate its return will be arrested and prosecuted.

No reward has been offered because there is a clear intention of not paying out any reward and the Underworld knows all rewards are subject to strict conditions that makes any recovery impossible unless there are arrests and the person who wants the reward becomes a registered Police informant.

These are the rules to which victims, insurers and art loss investigators are forced to adhere to.