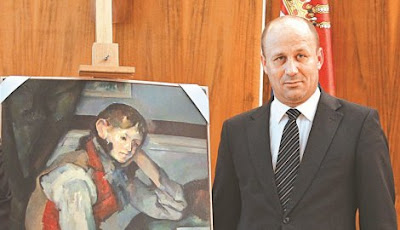 Paul Cezanne painting stolen "boy in a red vest" worth 100 million euros and one million six hundred thousand euros in cash, guns and four cars - the prey of the Service action to combat organized crime where they arrested four criminals whose leader John Pekovic ( 36) from Kaluđerice. Pekovic, according to 'Blic' learns, one of the gang leader "Pink Panther".

Ivana Pekovića police located the night before last in the vicinity of the stadium. As the car drove very fast, in pursuit of njiim included interceptors, of which one was the chief of traffic police Dragisa Simic.

He is, after the film Ustanicka chase along the street to the hotel "Radmilovac" and then in the direction Lestane, and eventually arrested Pekovića.

Pekovic is arrested with three accomplices Raska Mladenovic, Bob Nedeljkovskim and Goran Radojevic suspected of stealing the largest paintings in Europe - the image of Vincent van Gogh, Claude Monet, Edgar Degas and Paul Cézanne, and that the armed attack in the 10th February 2008. stolen from a museum in Zurich.

The pictures are stolen from the collection of Emil Birlea, participated in the attack by three masked robbers who broke into the museum for half an hour before closing.

Two days later, the stolen paintings by Monet and Van Gogh, estimated at 44 million euros, were found in a car parked at the Psychiatric Hospital in Zurich, and has since sought to Sezanovom "boy in a red vest" and Degas' Ludovic Lepic and his daughter " .

- One year after the robbery, the Serbian police entered the track Pekovic, whom we had information that one of the strongest members of the "Pink Panther". At the request of the Austrian police, who Pekovića looking for robbery in which the owner of jewelers hit by a gunshot to the head, the Serbian police raided his apartment in Zvezdara, which was found nearly a hundred watches and unique jewelry. Everything is painted and sent to the police, and soon began to arrive responses from Austria, Switzerland, Germany, where the jewelry was robbed - he says for 'Blic' source at the Interior Ministry.

The suspects had planned to sell the picture to the buyer in Belgrade for 3.5 million euros - the prosecutor said Miljko Radisavljević.

They have so far managed to collect 2.8 million Euros, and when they went to submit an image and take the last war, the police arrested them.

- Completed the transfer 1, 4 million, and then another 400,000 euros - Radisavljević said at a press conference with Interior Minister Dacic.

Radosavljevic said that the theft "was tipovana" for our citizenship, but for now does not want to reveal his identity in order not to endanger further investigation.

At a press conference in Belgrade, where she was exposed stolen painting "Boy in a red vest," Dacic said that the picture from a museum in Switzerland stole Ras Mladenović with some persons who are currently unknown. He added that the three arrested in the "vest" were Mladenovic logistical support in Serbia.

Dick Ellis said that whilst he was in Serbia investigating the theft of two Picasso's, recovered last Fall from a bank vault, without arrests, he met with Police Chief Dragisa Simic and described him as one of most corrupt Police Officers Dick Ellis had come across in 30 years of being a Policeman.

Dick Ellis went on to say that any recovery of high value stolen art on Serbian soil would require huge cash payments to Corrupt Political officials and Corrupt Police Chiefs before they would allow it to happen.

Worth noting in light of recent events !!

This has all the hallmarks of a classic buyback was it funded by the police or the insurers. Maybe somebody got double crossed if you read in between the lines.

I wonder who rained on whose parade