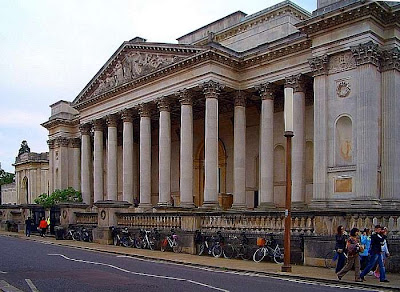 The alarm system at the Fitzwilliam Museum – triggered by thieves in a £10 million raid – was silent and not linked to police.
This means those passing nearby may not have been alerted to the drama unfolding as a treasure trove of jade works of art was plundered.
Meanwhile police were unaware until they were contacted by university security guards, who arrived at the museum to find the burglars had fled.
A “thorough review” of the museum’s 24-hour security is now under way after the artefacts valued at more than £10 million were stolen.
Cambridge University last night confirmed a high-profile exhibition of Chinese jade antiques will still go ahead at the gallery from Saturday, May 5.
But questions have been raised about security after the thieves struck in room 28 housing the permanent exhibition Arts of the Far East next to the café.
The alarm was linked to the university’s security team which attended the scene and contacted police, but it “would not have been heard by the public”, police told the News.
Cllr Rob Dryden, a former Cambridge major, said: “This theft is a blow for the city, but you would have thought they would have boosted security after the burglary at Durham – and I am surprised they only had a silent alarm.
“I would have expected them to have a loud alarm and flashing lights so the CCTV could be turned on, but of course it was in broad daylight anyway.
“I think they have to look at this seriously if they are going to keep objects worth millions of pounds safe.”
Silent alarms are used so as not to alert the burglars, but special dispensation is needed from Cambridgeshire police to have a totally silent alarm.
Usually, police recommend the alarm should become audible after 10 minutes.
The break-in happened at about 7.30pm on Friday last week.
Det Chief Supt Karen Daber, who is leading the police investigation in Cambridge, said: “The loss is a great blow to the museum and a thorough review of the museum’s security has taken place and the university is keen for anyone to come forward with information.”
She would not reveal how the thieves broke into the museum.
She added: “At the moment I do not want to go into details as specific as that. What I can say is that entrance was gained out of the view of the public.”

Detectives believe as many as four art thieves raided the Fitzwilliam Museum plundering £10 million of Chinese treasures.
Police have today released further details of how the works of art were stolen.
It is now believed as many as four people were involved in the burglary and broke in at the rear of the building at about 7.30pm on Friday (April 13).
They would have only been in the museum for a matter of minutes, triggering an alarm.
Police also believe a vehicle was used by the offenders and officers are checking CCTV from local car parks and park-and-ride facilities.
The 18 items stolen were mostly jade and part of the museum's permanent collection.
This evening, officers will be stopping people passing the museum between 6.30pm and 8pm and asking them a series of questions about last Friday.
Detective Chief Superintendent Karen Daber, who is overseeing the investigation, said: “We know these people acted quickly and were into the museum and out within a matter of minutes.
“However, I am still confident people who were in the area between 6pm and 8pm may have seen something significant that could help our inquiries.
“This remains the force’s number one priority and we will be working throughout the weekend and beyond in our efforts to trace those responsible and recover these works of art.
Posted by Art Hostage at 9:14 am