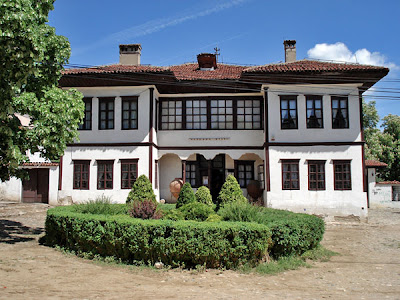 News from Zagrab.
-
Apparently, the raiders of Harry Winston Paris called at a French Law Court to give moral support to their counterparts who were being sentenced for previous Jewel heists.

On their way back they raided Harry Winston, passed the haul to the Turk, then left France clean ?

Dragan Mikic got 15 years, Goran Drazic got 10 years, and Boban Stojkovic got 6 years, although they can relax and receive funds to make life easier inside jail.
-
However, Dragon Mikic was sentenced in absentia as he had previously escaped custody during a gun battle.
-
To make things worse, Dragon Mikic observed his sentence from the public gallery dressed as a woman.
-
Some could say this brazen action shows Dragon has Balls, although he was not showing them !!

Upon another note, if Police review the video of the trial sentencing for Drazic and Stojkovic they will see the Harry Winston raiders enter and leave the court buildings on surveillance tapes and can also see them on court video. However, this was before they dressed up in women's clothes, apart from Dragon Mikic.

From there it should be easy to identify the Harry Winston raiders.

Now, where is the Harry Winston haul located ??

I have already said, South Suburbs of Paris.

Now off you go and recover the Harry Winston haul, if not then go and visit the Drazic and Stojkovic to make a deal.
-
Update:
-
There has been a miserly reward offer for the recovery of the Harry Winston haul set at
"Up to $1 million"
-
Of course this is a bogus reward offer, therefore why not set it at $10 million to make it sound tempting.
-
News coming in the reward offer is being dismissed and the Underworld have already countered with an Underworld reward offer.
-
This Underworld reward offer is for $2 million for a tip off that someone is speaking to authorities.
-
This gang is not good, but very good.
-
When will authorities and insurers realise their cheap reward offers do nothing to smoke out inside information that could realistically lead to recovering the Harry Winston haul.
-
So, does an insider take a chance and give information to authorities hoping to collect the false bogus miserly $1 million reward offer, or does an insider report to the Underworld Godfathers of potential leaks and collect $2 million reward ??
-
Food for thought, no doubt !!!!!
Posted by Art Hostage at 2:29 pm No comments: 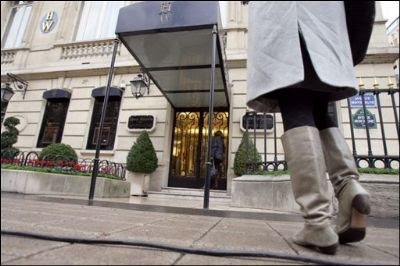 More news on the Harry Winston Raid in Paris.
This just in from Grad Zagrab. A former Zagrab Mayor's offspring.
"There is a new Modus Vivendi between Serbian and Croatian underworld figures."
Launched from the South Suburbs of Paris, from a house close to Tomulic parents home, the Harry Winston diamond robbery is a small part in the bigger picture of Underworld United Nations at work.
The Turk has control of the Harry Winston Diamonds as collateral for the 100+ kilo's of Heroin trafficked via Poland.
A proxy of the Turk has arranged for the Harry Winston haul to be deposited in a bank vault whilst the drug deal proceeds.
I suppose if the drugs get through and are sold maybe the Harry Winston Diamonds will be given back to the man behind the robbers. The drugs may have already got through and the Harry Winston diamonds are collateral after the drug deal ???
If authorities are quick they could recover the Harry Winston haul whilst it is still in Paris, south suburb's, Tomulic.
The United Nations Underworld are proving to be a formidable foe to authorities, not least Interpol.
Beware the gangsters mole who appears to be wearing costume jewellery, it could be the Harry Winston haul disguised as cheap paste.
A tried and tested way to smuggle diamonds over borders is to be blatant and use the excuse the diamonds are not real.
The more brazen and open, the more likely border guards will not suspect.
A quick bit of work backing the large diamonds from Harry Winston with foil to dull the appearance of the diamond, then set in a cheap mount and it is very hard to tell if the cheap looking costume jewellery is the real thing in disguise.
I bet if a reward of $10 million was offered there could be a breakthrough, no matter the reward will be false and never paid, it could smoke out inside information that could see a recovery quickly whilst the haul is still in transit ???
Upon another note, it may not many degree's of separation from this Harry Winston diamond robbery and the two art thefts in Switzerland earlier this year, January and February 2008, when first, two Picasso's on loan from Germany were stolen and funny enough taken back to Germany. Then the theft of the Cezanne and Degas, which still remain outstanding.
Wonder how long it will take before authorities realise they could stumble across either the Harry Winston diamonds or the stolen Swiss paintings if they collate their investigations.
The key is the contraband the Harry Winston diamonds and Swiss stolen paintings are used to purchase.
To be continued..............
Posted by Art Hostage at 2:49 pm No comments: 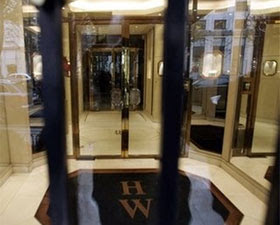 By Geoff Meade, PA
Friday, 5 December 2008
http://www.independent.co.uk/news/world/europe/pound70m-jewels-stolen-from-top-paris-jewellers-1053743.html
French police were today hunting for four thieves who carried out the biggest-ever jewellery raid in Paris - two of them dressed as women.


"They probably aren't still dressed as women," said one police source, as one of the most prestigious jewellery shops in the French capital was counting the cost of the audacious robbery which netted the gang almost £70 million in rings, necklaces and other expensive gems.

The four stormed into Harry Winston's, purveyor of jewellery to the stars and nobility, yesterday afternoon - able to identify staff by their names and even aware where the finest items, not on display, were stored.

The shop is in the so-called "golden triangle" of Paris shopping streets - the city's equivalent of London's Bond Street area.

About 15 browsing customers and the staff were bundled into a corner of the shop while the gang efficiently swept display jewellery into sacks. They virtually emptied the shop.

Police said they carried guns, but did not fire them. And an alarm system said to be linked to a central security system in Switzerland did not give sufficient advance warning for police to intercept the gang.

A special French police squad tackling organised crime - the Brigade de Repression du Banditisme (BRB) - predicted that the gems would be melted down and sold on in Eastern European countries, seen as the ripest for "fencing" stolen goods.

There was speculation that the raid might even have been carried out on the orders of East European crime syndicates.

The same branch of Harry Winston's was last targeted 14 months ago, in October last year. On that occasion, jewellery worth nearly £8 million was taken. The store offered a reward of more than £400,000 but the haul was never recovered and the thieves never caught.
Art Hostage comments:
News coming in from Tel Aviv about this robbery.
Apparently during the summer potential customers viewed some diamond pieces at this store and got to know the names of staff who served them, they also viewed from where staff retrieved some highly value pieces.
However, this customer did not buy anything and was really only checking out the premises and gaining intelligence about the workers.
More news coming in from Turkey revealing this raid was conducted by locals who could
originally hail from Albania or Turkey.
Now the biggest and best diamonds are not going to Eastern Europe but to Israel via Antwerp.
Funny enough, for the meantime some of this haul is being deposited in banks in Paris.
A case of moving the haul just a few blocks.
Keep you posted as more comes in.
Posted by Art Hostage at 2:49 pm No comments: