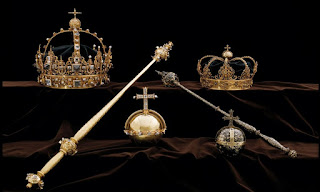 Thieves escape by motorboat after royal jewels heist in Sweden

Two crowns and an orb dating back to the early 1600s stolen from church in Strängnäs, west of Stockholm
Jewel thieves are on the run from police in Sweden after they stole some of the country’s royal jewels from a cathedral before fleeing in a motorboat.
The daring theft occurred at about noon on Tuesday in Strängnäs, west of Stockholm, while the cathedral was open to visitors, and a lunch fair was being held nearby.
The robbers then made their getaway in a motorboat that was waiting just a couple of hundred metres away on Lake Mälaren, Sweden’s third biggest lake, police said.
The local news channel Aftonbladet reported the thieves stole two crowns and an orb, adorned with gold, precious stones and pearls that come from the funeral regalia of Charles IX and Kristina the Elder, dating back to the early 1600s.
Witness Tom Rowell, who is getting married in the cathedral next week, told Aftonbladet he saw two men run from the building, jump into a small white motorboat and speed away.
“We contacted the police and told them and they told us that something had been taken from the cathedral,” he said. “I knew immediately they were burglars because of the way they were behaving.”
“It’s despicable that people would steal from a holy building and a historical building,” said Rowell.
It is believed the thieves fled via the vast system of lakes west of Stockholm. Police have mobilised a huge search operation with a helicopter and boats to find the men and recover the items but have so far been unsuccessful.
“It’s 1-0 to them right now,” Thomas Agnevik, a police spokesman, told Aftonbladet. “We want to spread information and pictures of these items so that they can be identified as stolen objects.”
King Karl IX died in 1611 and his wife Queen Kristina in 1625. The items are priceless and police said that the objects would be very hard to sell on the open market.
“What usually happens with this type of object is that they are recovered sooner or later, because there are very few people who are prepared to handle such items,” Agnevik said. “We have high hopes of getting them back.”
Police and cathedral officials said they did not know the value of the objects that were stolen. “It’s too difficult to translate these things into some kind of value. It’s such a unique object,” said Agnevik.
Catharina Fröjd, who works at Strängnäs cathedral, called the theft “an enormous loss in cultural value and economic value”.
Maria Ellior of the Swedish police’s National Operations Department told Sweden’s TT news agency the items would be “impossible to sell”.

Thieves climbed a two-metre high wall to steal antiques from the country home of a multi-millionaire entrepreneur.
The four suspects, who were captured on CCTV, raided the home of Prof Sir Christopher Evans in Bibury, Gloucestershire, on 9 July and took diamond rings, tiaras and bracelets.
The theft had a "devastating" effect on his wife Lady Anne, due to the sentimental nature of the items.
A "substantial cash reward" has been offered for information.
The CCTV footage captured the gang carrying items in a log basket across the grounds before putting them in a silver or grey Audi S5 and heading towards Cirencester.
Antique items taken include diamond rings, gold brooches, a tiara, a Cartier bracelet, a choker, silver candlesticks and three Art Nouveau silver rose bowls.
It is estimated the items stolen in the burglary - which happened between 17:00 and 20:00 on Monday 9 July - have a value of at least £1m.
In a statement, Sir Christopher, an internationally renowned life sciences entrepreneur originally from Port Talbot, said: "The real pain comes from what these stolen items mean and symbolise in our lives.
"Anne's engagement ring was her late father's signet ring - the only thing she has left of him. The diamond ring I bought my wife when our first child was born cost almost our entire savings at that point."
He added the couple had "always taken security around the property very seriously and we have obviously stepped up security with 24-hour dog patrols around the property".
Det Con Faye Satchwell-Bennett, from Gloucestershire Constabulary, said the burglary has had a "marked impact" on the victims, and asked that antiques dealers be on the lookout for any of the items.
Posted by Art Hostage at 12:26 pm No comments: