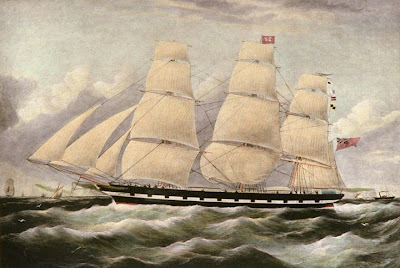 A prolific thief has been jailed after a valuable painting stolen from a Hull museum was found hanging in his dining room.

The £10,000 work of art, painted by the renowned John Ward more than 150 years ago, was taken from the wall of Hull Maritime Museum, in Queen Victoria Square, city centre, on June 17 last year.

Initially, it was feared the 12in by 18in painting of a ship, called Schooners Ellen Crawford and Dwina, had been stolen to order and would never be recovered.

It was spotted by chance when two Humberside Police detectives carried out an arrest in a dingy two-bedroom terrace on Princes Avenue, off Greek Street, west Hull.

They found Thompson, who has 58 previous convictions for theft, had hung the painting, in its impressive gold frame, on the chimney breast of his dining room wall.

It was surrounded by magazine cuttings and his wife Suzanne Lynford's own art work.

It is believed Thompson acquired the painting for his wife, due to her love of art.

He has now pleaded guilty to possessing criminal property and been jailed for 18 months.

His wife was also cautioned for possessing criminal property.

Doncaster Crown Court heard Thompson denied stealing the artwork and there was no evidence he had been the one to remove it from the museum.

Judge Jacqueline Davies said: "Items like this are part of the heritage of the city of Hull, building on its reputation and art links with the maritime world.

"This was a serious offence. It would be obvious to anyone looking at it that it was an item of some value - the frame is gilt and ornate. It has a plaque upon it describing its age and there are written documents on the back giving an indication to its age.

When the police recovered the painting, they did not take any fingerprints or carry out any forensic tests on it for fear of damaging it.

Thompson had screwed two holes into the back of the frame in order to hang it, but no damage was caused to the actual painting.

Judge Davies added: "The item in question is a work of art belonging to the Maritime Museum.

"Thankfully, the painting has been recovered, but it was a valuable item in your possession for a period of up to three months."

The court heard it was painted in 1843 – the same collar tag as PC Jacketts.

He added: "It was a strange coincidence."

Simon Green, assistant head of culture and lifestyle for Hull City Council, which runs the museum, said: "We are delighted that the painting was found and safely returned to its home in the Maritime Museum."

Mr Green, who revealed the painting had been screwed to the wall when it was taken, added: "A theft from a public collection is a theft from everyone in the city."

This is a valuable insight into how Police investigate art crime.

When an art crime is committed Police issue a Crime number to the victim and then, wait for it, Police cross their fingers and hope they stumble across the stolen art during an unrelated investigation.

That's it folks, that is the sum of Police efforts into investigating art related crime.

In this instance Police were lucky, but the other 99% of the time stolen art remains outstanding.
Posted by Art Hostage at 4:30 pm No comments: 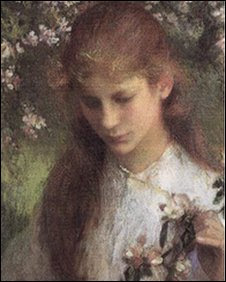 A £50,000 reward has been offered after paintings were stolen during an aggravated burglary in Somerset.

Sixteen paintings were stolen including Endymion by George Frederick Watts, alone estimated to be worth up to £1m.

Masked intruders got away with the works after forcing their way into a property, near Bruton, in March 2009 and left a woman tied up.

Police said the victim, 47, was found at 1600 GMT the next day with bruising, and "extremely shaken and distressed".

Richard Ellis, director of the Art Management Group, which offers services for people seeking to acquire, conserve, or recover art and antiques, said: "Clausen was a prominent British artist and a member of the [Royal] Academy. Apple Blossom is an oil on canvas which is signed and dated 1899 on the reverse.

He said the paintings were not saleable on the open market.

"They have all been placed on the Art Loss Register and would be very difficult to shift through dealers. It is conceivable they could have been used as a commodity to exchange for drugs or as collateral for other criminal operations," he added.

The owner of the paintings is offering the reward for the arrest and conviction of the offenders, and the recovery of the artworks undamaged.
-
Update:
-
Detective Inspector Jim Bigger of the Somerset East Public Protection Unit said: "This is a substantial reward, however I do not see this a simple recovery exercise for the paintings, I am focused on the facts that the paintings may lead me to the persons responsible for committing this extremely violent crime, a crime which resulted in my victim being tied up for 18 hours. That is my objective."
Posted by Art Hostage at 9:25 pm No comments: