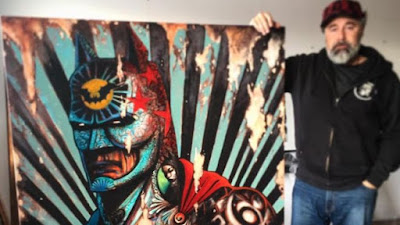 About £50,000 worth of artwork by Belfast artist Terry Bradley has been stolen after a "well-planned" raid.
It is estimated that between 80 and 100 pieces of art were taken from a pop-up gallery in the city centre.
These included original canvases worth up to £10,000. A large original painting of Batman, worth an estimated £2,500, was also taken in the burglary.
Ashley Bradley, the artist's wife, said they believed thieves gained access after one hid in the gallery overnight.
She added that Mr Bradley was "devastated" by the thefts.
"Terry puts his heart and soul into his work," she said. "They're a moment in time. The original pieces cannot be replaced.
"Some of the original drawings have been ordered by people for Christmas - they're all gone. So much stuff has been paid off by customers and we're going to work to replace what we can.
"Terry is completely floored by what's happened."
Staff at the gallery have said they will work hard to replace the stolen artworks. Gayle Williamson said she was heartbroken when she arrived at work this morning: "I was speechless. What can you say?
"It's horrendous and I wasn't expecting it in the mouth of Christmas, but we'll do our best to replace what orders we have."
Police said they are appealing for witnesses to the burglary that took place on Chichester Street between 18:00 GMT on Wednesday and 10:00 on Thursday.
Mrs Bradley said the family believed the gallery had been targeted by people who "knew what they were doing".
"We think someone had hidden in the gallery and opened the back door," she said.
"I was in last night with my daughter at about 21:30. We hope somebody wasn't in there with us.
"It would have taken a long time. These are big and heavy pieces - I can only lift one picture at a time.
"My sister opened at 10 o'clock this morning and it was all gone."
Mrs Bradley, who vowed that the gallery would re-open on Friday, urged anyone who has any information to come forward.
"We're going straight back to work. Nobody was hurt. Hopefully we have enough time before Christmas to replace what can be replaced.
"My hope is a fan of Terry will see this art being passed off. I know they'll be outraged when they hear this has happened.
"If someone sees them, they will know what they are and hopefully come forward with information so we can get them back."
Stolen artwork by Mr Bradley has been recovered before.
In 2014, two paintings, worth £6,000 each, were taken from a shop in south Belfast. Police found them after a tip-off.

Toronto police search for stolen art worth more than $50K 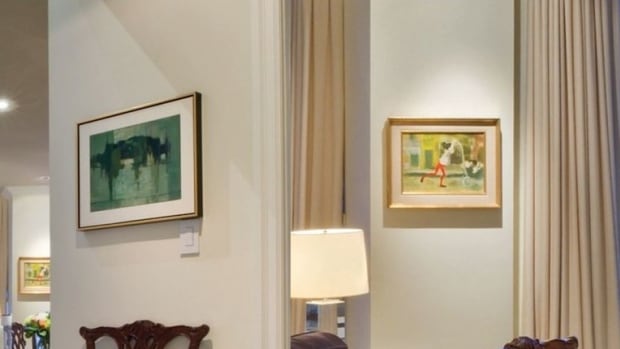 Police are searching for several paintings worth more than $50,000 after they were stolen from a home in Toronto's Yorkville neighbourhood last month. 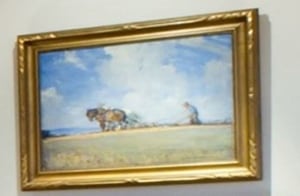 The stolen paintings have an estimated value of approximately $50,000. (Toronto Police)
"I wanted to get this out quickly because I believe the art community is an honest community," Fenwick told CBC Toronto. "If these things start turning up for sale, maybe I'll start getting some information." 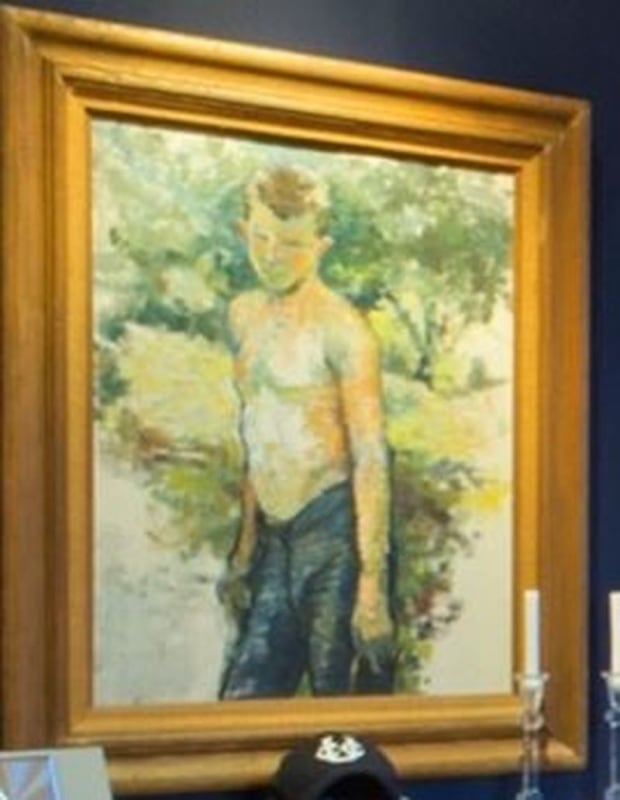 Detective Constable Matt Fenwick says he believes the paintings were stolen in the early-morning hours of Oct. 16. (Toronto Police)
Fenwick says there were no signs of forced entry, so he thinks the suspect was known to the victim.
Anyone with information is asked to contact police at 52 Division or Crime Stoppers.


Qatari sisters robbed of $5.3 million in valuables near Paris

Two Qatari sisters were robbed north of Paris by masked men who took jewelry and other personal effects worth an estimated 5 million euros ($5.3 million), officials say.
The women were being driven from Paris-Le Bourget Airport to Paris-Charles de Gaulle Airport when two masked men intercepted their car Monday, said the general secretary of the Bobigny prosecutor, who according to protocol did not wish to be named.
Forcing the vehicle to stop, the robbers sprayed tear gas at the driver and manhandled the women before taking their suitcases containing the valuables, the official said.
The Banditry Repression Brigade, a special police unit within the Interior Ministry, was set to interview the women.
Spate of high-profile crimes
The case is the latest in a spate of recent high-profile robberies, or attempted robberies, in the Paris region.
On October 3, American reality TV star Kim Kardashian West was tied up and robbed at gunpoint of an estimated $10 million worth of jewelry in a luxury private apartment in Paris' 8th Arrondissement by men dressed as police officers.
And this month, masked attackers accosted Bollywood actress Mallika Sherawat and her French boyfriend in the hallway of his apartment building in Paris' 16th Arrondissement.
The three attackers sprayed tear gas at the couple, pushed the actress to the ground and tried to grab her bag, but fled empty-handed after the two fought back.
Two years ago, gunmen brandishing automatic weapons robbed a Saudi Embassy convoy carrying a Saudi prince to Paris-Le Bourget Airport, taking 250,000 euros and diplomatic documents, French police said at the time.

Posted by Art Hostage at 9:04 pm No comments: