Art and Antiques with a profit, only when a Thief holds a sale !! 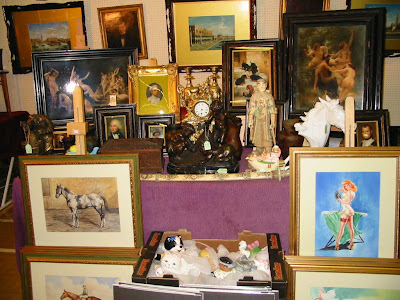 Brussels - A Belgian antique dealer returned from holiday to find a thief had broken into his shop, opened it for business and sold his stock.

While Johan Dumon, 62, from Mechelen, was away the burglar stole valuables from his shop and also his home and held a two day sale.

Neighbours didn't find the sale suspicious - even though the shop had been closed for three years, reports De Morgen.

"I can only conclude the burglar was a clever man," said Mr Dumon. "Instead of dragging it all out of the house he sold it on the spot."

Dumon said the stolen antiques were worth at least €17 000.

Police have spoken to witnesses who attended the sale and have been able to release a description of the man.

Attorney Goedele Van den Brande is confident the man will soon be found - but he says recovering the stolen goods could be impossible as 'purchasers' cannot be forced to return them. - Ananova.com

I must say this story raised a smile, the sheer nerve of thieves never fails to amaze me.

However, it does prove that the only way to buy a bargin from an Antiques dealer is if the stock is bought via a thief.

I am sure this thief will be caught and will be someone known to the loser.

There must an element of an inside job for this to happen.