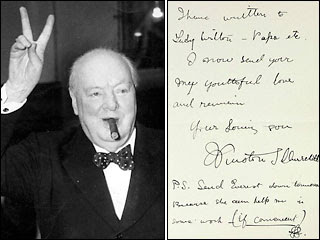 The theft comes just days after it was suggested on TVs Antiques Roadshow that a similar note could fetch a huge amount of money.

Churchill was a minister in 1910 when he wrote the letter to Cranbrook, Kent, thanking locals for their sympathy to George V after his father, Edward VII, died.

It is believed that the thief might have been tempted to nick it after watching the BCC1 show, reports British tabloid The Sun.

London, Aug 9 (ANI): A hand-written letter from the wife of Sir Winston Churchill has been found by police during a drugs raid at a house in Mexborough, South Yorkshire.

British officers found the letter and three cheques mounted on a card inside a plastic sleeve with a quantity of heroin.

The note from Clementine Churchill thanks a woman for making a donation to a Red Cross fund of which she was the president.

Police want to trace the owner of the letter, which is dated 1942.

The letter says: “This is to acknowledge with grateful thanks your contribution to Mrs Churchill’’s Red Cross Aid to Russia Fund.”

The Aid to Russia fund, set up by the Red Cross in 1941 to pay for clothing and medical supplies to send to Britain’’s Russian allies, raised 8million pounds.

Mrs Churchill was the fund’’s president.

A 55-year-old woman was arrested on suspicion of theft and possessing class A drugs at the property.

The woman’’s 32-year-old son and her sister, 41, were also arrested on suspicion of theft. They have been bailed until October while police make further inquiries.

“The address on the letter is not in Doncaster but it is South Yorkshire. I am confident it is not a reproduction as it is handwritten on both sides. We urge anyone with any information about the letter or who believes it may belong to them to get in touch with us, The Independent quoted PC Steve Roberts of Doncaster police, as saying. (ANI)
Art Hostage comments:
These two cases connected ????
What these two cases show is a direct link between art theft and the drugs trade.
Unfortunately, victims and art lovers can only wait until Police stumble across stolen art during drug raids.
By treating stolen art recovery as a bonus of other Police raids, drugs mostly, rather than an intention of a Police raid looking for stolen art, mainstream stolen art recovery has been reduced to almost zero, not withstanding the high profile cases, whereby Police are forced to devote resources for political reasons.
Posted by Art Hostage at 6:20 pm