Stolen Art Watch, Versace, Dr No, We Will Never Dr No !! 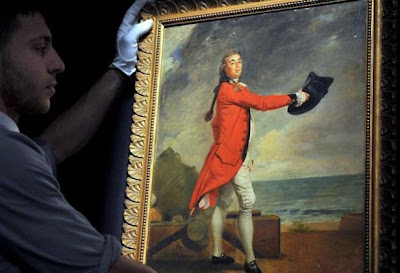 Painting in Versace sale was 'stolen'

http://www.independent.co.uk/news/uk/crime/painting-in-versace-sale-was-stolen-1647359.html
When the list of items offered in the sale catalogue for tonight's auction of the late designer Gianni Versace's possessions was announced, Lot 72 was billed as the star item.

A "newly-discovered" 18th century masterpiece by the German neoclassical artist Johann Zoffany, it was described by Sotheby's experts as "rare", "important" and "exciting".

But, last night, embarrassed organisers withdrew the item from the auction, amid fears it was stolen. The portrait of Major George Maule was one of 550 pieces of furniture and works of art from Versace's Lake Como Villa up for sale.

However, following the publicity, it is understood that descendants of Major Maule contacted the authorities claiming that the painting had been stolen 30 years ago – 15 years before Versace, who it is said did not realise the work was by a celebrated artist, bought it. The relatives telephoned the Art Loss Register, which identifies stolen works, which in turn alerted Sotheby's and itagreed to withdraw it.

A spokeswoman for the Art Loss Register confirmed it was investigating the suggestion that the painting was stolen. A spokesman for Sotheby's simply said: "Lot 72 has been withdrawn with the full agreement of Sotheby's consignor."

The total worth of the items on sale was expected to exceed £2m and the Zoffany painting was considered the centrepiece of the sale.

Zoffany, a favourite of George III, completed the portrait in 1783. The painting had a guide price of £40,000-60,000 but organisers hoped it would fetch more.
Art Hostage comments:
Strange, how every so often stolen art comes to light when a celebrity or public figure dies and their estate is auctioned.
Of course they never knew the art was stolen and they are just mere victims of a dishonest art trade. Enough firewalls to protect integrity.
Or could, the buying of stolen art be something "Deliciously Dishonest" for mega wealthy people to get their rocks off ??
Posted by Art Hostage at 7:07 pm