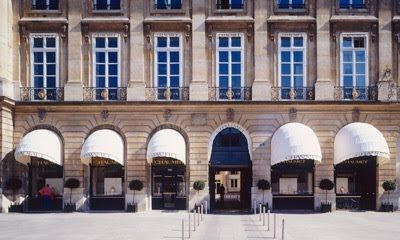 Armed and masked raiders barged into the former jewellers of Napoleon and Queen Victoria in Paris on Friday and forced staff to hand over precious stones worth hundreds of thousands of euros.

The pair raided the Chaumet store on Place Vendome, the French capital's most glamorous shopping address, after stealing an employee's handbag containing a security card to open a service door, investigators said.

Once inside, they brandished guns and demanded that employees empty safes in the two century-old establishment, known as a supplier of jewels and precious stones to top fashion designers and the royal houses of Europe.

A police official, speaking on condition of anonymity, described the robbery as "extremely audacious", unusual in its execution and apparently well planned by a gang well informed about the store's layout and security system.

A Chaumet manager confirmed the theft and said it would take some time to estimate the total value of the stones taken from the storage area as a full inventory would have to be taken.

In recent years France has seen several high-profile robberies in luxury jewellery stores, many of them thought to be carried out by a gang of thieves from the former Yugoslavia known as the "Pink Panthers".

The last hold-up in Place Vendome was in May of this year, when Chaumet's near neighbour Chopard lost 15 million euros worth of stock to armed robbers.

Three more big hits before the end of the year !!!
Posted by Art Hostage at 5:16 pm