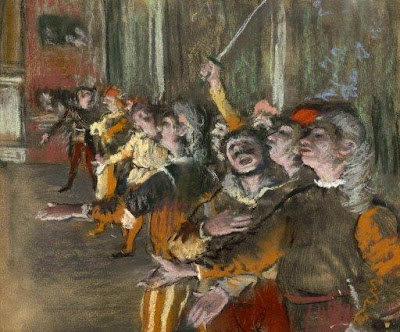 'Guard behind Edgar Degas artwork theft'
http://www.presstv.ir/detail.aspx?id=115161§ionid=3510212
A security guard has been arrested in connection with the theft of a painting by the Impressionist artist Edgar Degas which was stolen from a museum in Marseilles in southern France, a public prosecutor says.

“A night watchman at the Musee Cantini has been apprehended in connection with the disappearance of Edgar Degas's very expensive painting,” Marseille public prosecutor Jacques Dallest said on Friday.

He, however, did not say if the artwork had been recovered.

The disappearance of “Les Choristes (The Chorus)" was discovered when the museum opened on Thursday morning.

The Musee d'Orsay had loaned The Chorus to the Cantini gallery for an exhibition on the work of Degas. The show was due to close on Sunday before touring to Italy and Canada.

The Chorus, which dates from 1877, is a small work in bright pastels portraying a row of male choir singers on stage.

It was one of many works loaned out by the Musee d'Orsay in recent months to raise money.

Deepening the mystery over the theft of a valuable painting by the 19th-century French artist Edgar Degas, the police in Marseille on Friday released a night watchman who had been detained for questioning the day before.
-
He was on duty when the work, valued at about $1.15 million, vanished from the Cantini Museum there. The piece, “The Chorus,” a small pastel that shows singers performing on a theater stage, was missing when the museum opened on Thursday, and there was no sign of a break-in.
-
It was one of about 20 Degas works on loan from the Musée d’Orsay in Paris for an exhibition of paintings with theatrical themes. It was to close on Sunday and travel this year to Italy and Canada.
-
Art Hostage Comments:
You pay peanuts, you get Monkey's.
-
Low paid guards are easily corrupted
Posted by Art Hostage at 12:49 pm