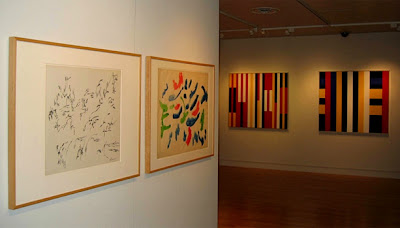 Guido Molinari's son believes whoever stole eight of his late father's paintings - worth a total of $800,000 - last week must have been pretty frustrated during the heist, since they had to cut some of the large canvases to get them out of the building.

The thief or thieves snatched the only remaining works Guy Molinari had from his dad's hypnotic, diamond-shaped series, painted not long before he died in 2004. Because his father was an acknowledged giant of Quebec abstract art, the theft also tore a hole in our collective artistic heritage, he said.

"The canvases they cut into can never be restored to the way he created them," Molinari, 52, added.

"He created a unique pictorial space," Molinari said about his father's contribution to the art world during a 45-year career starting in 1954. His abstract minimalist paintings proposed a new way to perceive foreground and background, he explained, by blending them to create alternate layers and trick the eye.

"It is similar to the space of your imagination," he said.

The heist took place on the night of July 17 to 18 in Notre Dame de la Merci, about 110 kilometres north of Montreal, where Molinari lives and stored the works. The stolen canvases include some as large as two metres by three metres, he said.

Based on recommendations Molinari got from police to reinforce the security of the storage space, a few years ago he installed metal bars on all the doors to the room. The doors were also padlocked behind metal plates. The thief or thieves got in through a window and could not take away large framed pieces. That is probably why they had to cut them out, Molinari said.

Only about 10 people knew the elder Molinari's works were stored in the room, which is adjacent to a print shop. The works were not insured because when Molinari inherited them in 2008 there were 50 of them worth $4 million and the cost of insuring the lot was exorbitant, he said.

"When you're the son of someone like that you always admire them," Molinari said. "Now that he's gone I need to still protect him, and his image and his work."

The Sûreté du Québec's art theft specialists are actively hunting for the canvases, SQ Sgt. Gino Paré said. He declined to provide details of the investigation.

Alain Lacoursière, a former Montreal police officer and a consultant who specializes in artwork security, told The Gazette this year there is a demand on the global black market for well-known Quebec and Canadian art.

"It is sometimes given instead of cash to crime bosses to pay for drug debts," Lacoursière said. "The art could be used in a new hotel" in South America or the Middle East, for example.

Julian Cargnello, a 24-year-old Montreal painter having his third gallery show, said Molinari has been a huge influence on generations of artists.

Suspected thief from Saint-Sauveur, about an hour's drive south of the workshop.

Police said the suspected thief is a man in his 40s, from Saint-Sauveur, about an hour's drive south of the workshop.

He is scheduled to appear in court Oct. 17 on charges of possession of stolen goods.

The artist's son, Guy Molinari, will examine the state of the eight works, the value of which is estimated at $800,000.

The abstract artist died in 2004. He is well known for his use of contrasting colours and geometry in paintings.