Stolen Art Watch, Kunsthal Museum Art Heist, Did They, Or Did They Not, That Is The Question?

Suspects in the theft of seven artworks have offered to return them in exchange for moving their trial from Romania to the Netherlands, their lawyers say.
The deal was offered by Radu Dogaru and five other suspects as they went on trial, one in absentia, in Bucharest.
They are accused of stealing masterpieces, by Picasso, Gauguin and Monet among others, from Rotterdam's Kunsthal museum last October.
There were fears that some of the paintings had been destroyed.
The remains of paint, canvas and nails consistent with those of the famous works were found in the oven of Olga Dogaru, mother of Mr Dogaru, at her Romanian home in February.
She had confessed to burning an unspecified number of paintings, although later retracted her statement.
Forensic experts have so far refused to say definitively whether or not the burnt remains were from the stolen paintings.
Lightening raid The trial of Radu Dogaru and his five alleged accomplices - one of whom is still on the run - was opened and adjourned by the Romanian court until 10 September.
One of the lawyers said their clients had offered to return five of the paintings, with no mention made of the remaining two.


Another lawyer, Maria Varsii, said: "It is more likely the paintings are intact. My client says they can be handed over to the Dutch authorities. In exchange, they want to go on trial in the Netherlands."
The works have been valued at around 18m euros (£15m; $24m) although they were previously said to be worth as much as 200m euros.
They include Monet's Waterloo Bridge, Picasso's Harlequin Head, Matisse's Reading Girl in White and Yellow and Lucien Freud's Woman with Eyes Closed.
The works were taken from the museum through a back entrance in a pre-dawn raid that lasted less than three minutes.
It was the Netherlands' biggest art theft since 20 works disappeared from Amsterdam's Van Gogh museum in 1991.
The Rotterdam paintings came to light some months later when Mariana Dragu, an art expert at Romania's National Art Museum, was asked by a friend to examine some artworks he was planning to buy.
She said she called the prosecutor's office when she realised she was looking at the stolen originals.
A few months later, three Romanian men were arrested on suspicion of involvement, including Radu Dogaru.
It was following her son's arrest that Mrs Dogaru allegedly burned the artworks at her home in the village of Carcaliu, in the Danube Delta region of eastern Romania. 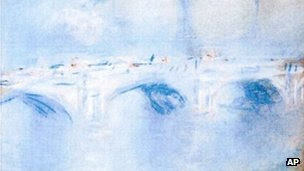