What we know about suspects accused in Stradivarius theft

MILWAUKEE (WITI) – FOX6 News is learning more about the suspects accused in the theft of the Stradivarius violin. They are accused of pulling off one of Milwaukee’s largest heists ever.

Salah Jones
During a news conference on Thursday, February 6th, Milwaukee Police Chief Ed Flynn said an anonymous tip helped them to identify a primary suspect — 41-year-old Salah Jones.
Police believe 36-year-old Universal Knowledge Allah purchased the taser used in this case. Law enforcement officials worked closely with Taser International which led officials to Allah.
Jones has a criminal history involving stolen art in the past.
In 1999, he was charged with trying to sell a $25,000 statue back to its owner. The statue was taken from a gallery in 1995.

Universal Allah
Allah was once a member of a black supremacy group, known as the “Five Percenters.” He legally changed his name in 1999 from Shaudell Johnson.
On the Internet, he can be heard preaching the word of a supreme being.
“My name is Universal Knowledge Allah. Universal — that which can be applied everywhere. I bear witness to myself having a supreme intelligence, and supreme knowledge of myself. Allah is the name of the supreme of all beings — the supreme being black man of Asia. I am the supreme being black man of Asia,” Allah is heard saying online.
Back in 2005, FOX6 Investigators did a story on the “Five Percenters” — the black supremacy group Allah has been linked to. Members of the group were accused of slashing tires of vans rented by the Republican Party a year earlier.
It has been revealed that he recently cut the hair of Milwaukee Mayor Tom Barrett.
Allah does not have a criminal record.
A 32-year-old female suspect has been released from custody.
Charges in this case could come Friday morning, February 7th.

1715 Lipinski Stradivarius violin
The Milwaukee Police Department recovered the stolen 1715 Lipinski Stradivarius violin from a home in the city’s Bay View neighborhood. It appears to be in perfect condition — and is expected to be returned to its owner soon.
On Monday, January 27th, two armed suspects, a man and a woman, approached concertmaster violinist Frank Almond of the Milwaukee Symphony Orchestra who had just performed at Wisconsin Lutheran College.  Almond walked to a parking lot after the concert and the suspects approached Almond. They used a taser on Almond, causing him to drop the violin and fall to the ground. The suspects then stole the violin, valued at approximately $6 million.

Sculpture that dates back to fifth century BC is worth $1.2 million

Simon Metke, 33, kept an ancient artifact worth $1.2-million on a bookshelf for two years.

EDMONTON - For two years, a stolen ancient artifact worth $1.2 million sat on an Ikea bookshelf in a south Edmonton apartment, displayed above a plastic Star Wars spaceship, flanked by crystals and a small collection of stuffed animals. The Persian bas-relief sculpture, dating from the fifth century BC, sat slightly behind a handmade vase decorated with a painted fish and filled with dried flowers.
Then, at about 9 a.m. on Jan. 22, a team of police officers working with Quebec RCMP’s Integrated Art Crime Investigation Team banged on Simon Metke’s apartment door.
“There’s like 20 RCMP officers flooding my place, the sunshine’s coming in, the crystals are making rainbows everywhere, the bougainvillea flowers are glowing in the sunrise light,” Simon Metke, 33, said Thursday evening, sitting cross-legged in his south Edmonton apartment.
“And I’m just sort of, ‘What the heck is going on?’ And, OK, here’s the thing I think you’re looking for. This thing is a lot more significant than I thought it was.”
Police say the sculpture was stolen from Montreal’s Museum of Fine Arts in September 2011. The same thief is then believed to have taken a second piece from the museum a month later. That piece, a statuette of a man dating from the first century B.C., is still missing. The man who took the pieces has not been charged. Police aren’t saying what led them to Metke.
Metke said he bought the sculpture from the neighbour of a friend in Montreal, thinking it was an “interesting replica” or maybe an antique — but mostly drawn to it because of his own interest in Mesopotamian religion and art.
“I didn’t realize that it was an actual piece of the Persepolis,” he said, referring to the ancient Persian ceremonial capital. “I’m honoured to have had it, but I feel really hurt that I wasn’t able to have a positive experience in the end with it.”
He said he was somewhat skeptical about buying the piece for $1,400 — mostly because he thought it might not be worth it. In the end, he said he bought it to help out his friend, a “starving artist” who received a $300 commission, and the seller, who said he needed to pay child support and rent, and assured Metke it was “a good deal.”
Metke said he thought of taking it to Iran or Iraq to see if an art expert knew what it was, or going on Antiques Roadshow with it.
“That would have been an interesting Antiques Roadshow, I guess,” he said.
Instead, Metke was charged with possession of stolen property. He and his 25-year-old girlfriend, Jana Lang, were also charged with trafficking marijuana and possession of money obtained by crime.
Metke said he had been working on getting his medical marijuana licence, and that the money seized by RCMP were donations and savings to start a business teaching children about ecology.
“I hope that people will understand, this is just something I thought was neat,” he said. “This was an interesting piece of art that I could put on the shelf and have represent my own personal spiritual journey that I was going through.”
Quebec provincial police announced the recovery of the artifact and the charges at a news conference Thursday in Montreal. The artifact was displayed under armed guard.
Danielle Champagne, director of the Museum of Fine Arts’ foundation, called the thefts of the two pieces “very unusual.” The last theft from the museum was in 1972, she said.
Metke said he is worried about the charges, and particularly the impact they will have on his girlfriend. Neither of them have been in trouble with the police before, he said.
Still, he said he’s glad he was able to care for the ancient piece — even if he didn’t know it.
“It sort of feels like it may have come to me to be protected so that it didn’t get destroyed or lost or something like that ...,” he said. “I’m not really happy with the way that I found out what it was, but ... I’m really honoured to have been able to look after it.”
He said he wishes he had known what it was, so he could have turned it in for an undisclosed reward offered by the museum's insurer.
Metke and Lang are slated to appear in Edmonton Provincial Court on March 19. 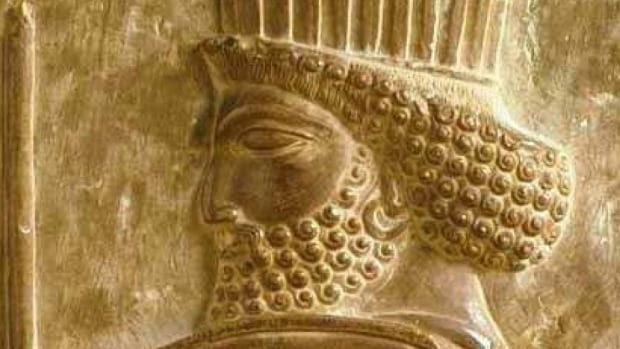 This recovered artifact — a fragment from a fifth century BC Persian bas-relief — was found in an Edmonton home after it was stolen from the Montreal Museum of Fine Arts. (Quebec Provincial Police)

Quebec provincial police have found an ancient artifact in Edmonton after it was stolen in broad daylight from the Montreal Museum of Fine Arts.
Police have been searching for more than two years for two pieces of art, which were stolen from the museum in September 2011.
Investigators said they believe a man slipped the antiquities into his pockets and slipped outside.
The recovered artifact — a fragment from a fifth century BC Persian bas-relief  — was found in an Edmonton home on Jan. 22 when officers from the Sûreté du Québec/RCMP Integrated Art Crime Investigation Team and the Alberta RCMP carried out a search warrant.
Police in Quebec say that a tip led them to the home last month. Sgt. Joyce Kemp from the Quebec Provincial Police said investigators believe the artifact was purchased for much less than its value.
"I cannot give you details to how it was purchased because the investigation is still ongoing it might interfere with the next steps of the investigation," she said.
"I cannot give you the exact number but it's worth $1.2 million and clearly the person paid much less than the value of the artifact."
Simon Metke, 33, is charged with possessing stolen property over $5,000, possessing a controlled substance for the purpose of trafficking and possessing the proceeds of crime.
A 26-year-old woman is charged with possessing the proceeeds of crime and possessing a controlled substance for the purpose of trafficking.
Police are still searching for the second stolen artifact, a Roman marble statue of a head, dating back to the first century BC. Police are still searching for this artefact, a marble statue of a Roman head. (Quebec Provincial Police)

The two pieces were not in glass cases, but they were securely anchored to their displays, and investigators said they are not sure how the thief managed to take off with the antiquities.
On security footage, a suspect is seen strolling through the museum wearing jeans, a dark jacket and a baseball cap.
Anyone with information is asked to contact the SQ at 1-800-659-4264 or email art.alert@surete.qc.ca.
The museum's insurance company has been offering what it calls a "substantial reward" for information leading to the recovery of the pieces.

Edmonton, Alberta – On January 29, 2014, RCMP arrested and charged Simon METKE, 33, of Edmonton, with Possess Stolen Property over $5,000; Possess a Controlled Substance for the Purpose of Trafficking; and Possess Proceeds of Crime.

Jana LANG, 26, of Edmonton was charged with Possess a Controlled Substance for the Purpose of Trafficking; and Possess Proceeds of Crime. Metke and Lang appear in Edmonton Provincial Court on March 19, 2014.
On January 22, 2014, RCMP Serious/Organized Crime North provided assistance to the Surete du Quebec/RCMP Integrated Art Crime Investigation Team by executing a search warrant at an Edmonton residence and recovering an ancient artifact stolen in September 2011 from the Museum of Fine Arts in Montreal. The piece worth an estimated $ 1.2 million dollars is a fragment of Persian bas-relief dating from the fifth century BC.
The investigation continues in order to locate a second stolen artifact. This item is a marble statuette representing the head of a man in ancient Egyptian style dating from the first century BC. This piece was stolen Oct. 26, 2011 from the Museum of Fine Arts in Montreal.
The investigation team is asking for the public’s assistance in locating this second item. If you have information as to the location of this item, please call Central Criminal Intelligence, Sûreté du Québec, at 1-800-659-4264; or at email: art.alerte @ surete.qc.ca . All information received will be treated confidentially.