The judgement below proves once and for all that no money will be paid for the recovery of stolen art and antiques.
If ever there was any doubt, it has been confirmed by this judgement that anyone with information that leads to the recovery of stolen art and antiques will not get a single penny and any reward offer is not worth the paper it is written on.
Anyone dealing with ex Police such as Dick Ellis and Art Loss Adjusters like Mark Dalrymple will be passed to Undercover Police where they will be set up and not paid for their efforts.
Be warned, unless a person with information that leads to the recovery of stolen art and antiques is prepared to give that information free of charge, without any reward or fee, then they will be hounded, arrested and indicted.
This case started as a letter to Mark Dalrymple, who was offering a public reward. The police intervened and then they rejected the reward offering instead a buyback. Later they claimed this was legitimate police deception.
The unresolved legal question is whether the police have the right to interfere with a public offer of a reward.
Can the state prevent a party claiming a legitimate reward offer and face no legal redress?

This is the tiny outbuilding where those accused of carrying out the Hatton Garden jewel robbery are said to have plotted the diamond heist.
Hidden behind a suburban street near a public park in North London, the gang members are thought to have met in the building in the months leading up to the raid.
It is believed the building is where they stored property and where neighbours reported hearing loud drilling noises. 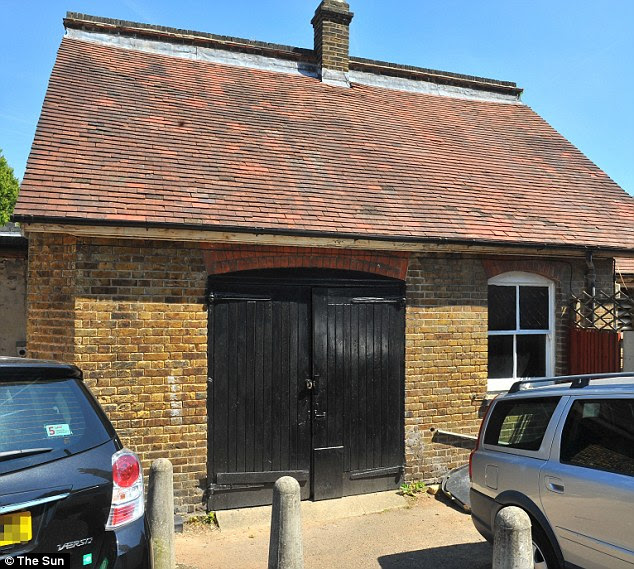 +11
The outbuilding in the grounds of a North London pub, where the Hatton Garden robbers are alleged to have plotted the heist
According to The Sun, the brick building, which has black wooden doors, sits in the grounds of a pub and was leased out by a plumbing company around 18 months ago.
It was raided by plain clothes police officers six weeks after the heist over the Easter weekend.
A source told the newspaper: 'The building is very anonymous. There is an old concrete floor inside.'
The picture of the gang's alleged hideout comes after nine people in total have been charged with conspiracy to to commit burglary in connection with the raid.
Police search Kent house in Hatton Garden investigation 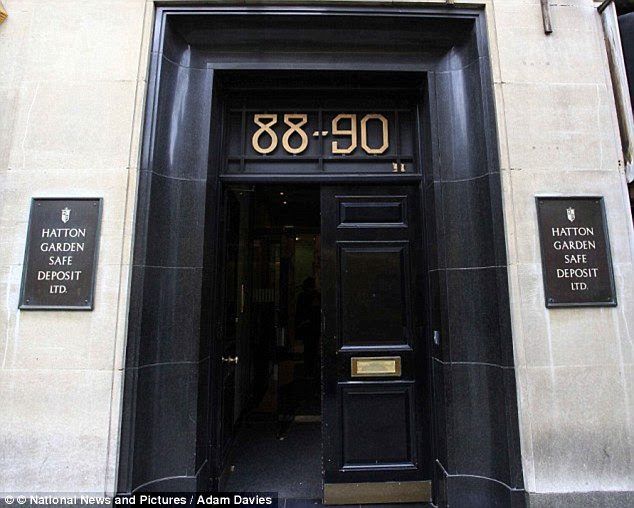 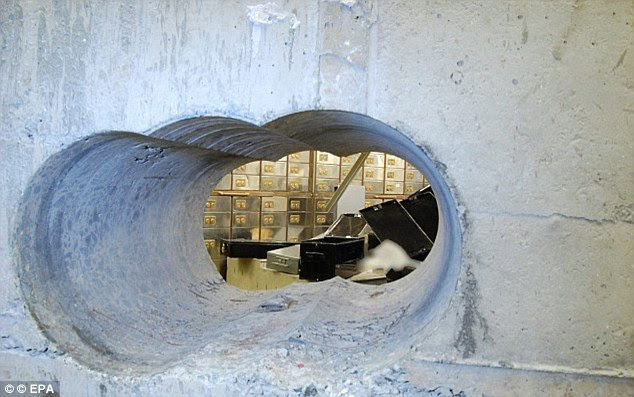 +11
It is thought that the thieves forced open shutter doors and used a drill to bore a hole 20in deep, 10in high and 18in into the vault wall
Last month, eight men appeared at Westminster Magistrates Court in connection with the jewel heist, with the gang having a combined age of 490.
The so-called Dad’s Army gang, whose ages range from 48 to 76, are accused of stealing jewels worth more than £10million.
The eldest suspect is pensioner Brian Reader, 76, who was arrested after police stormed his £850,000 home in Dartford, Kent, where they also detained his son, Paul, 50.
Boiler engineer and plane enthusiast Hugh Doyle, 48, property developer Terry Perkins, 67, and Daniel Jones, 58, all from Enfield, north London, are among those charged. 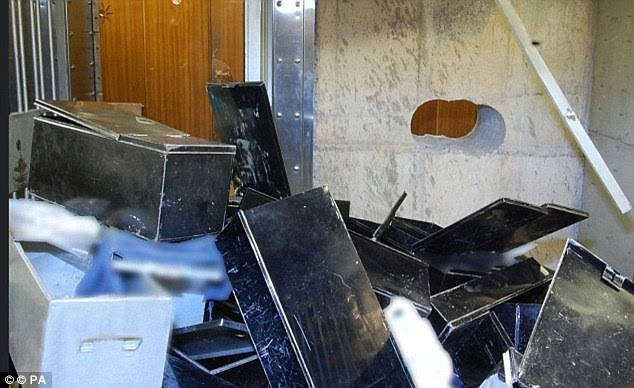 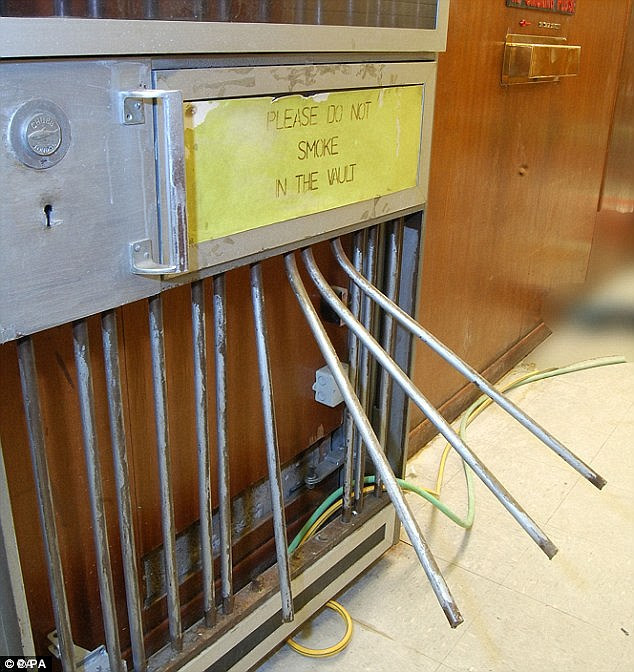 +11
The gang broke through this door to gain entry to the premises before going through 73 boxes
Police have also arrested 74-year-old John Collins, from Islington, north London and former mechanic William Lincoln, 59, from Bethnal Green, east London.
Carl Wood, 58, from Cheshunt, Hertfordshire, has been charged with the same offence.
A ninth man, John Harbinson, 42, of Benfleet, Essex, was also charged.
They were arrested when more than 200 officers swooped on 12 addresses across London and Kent. 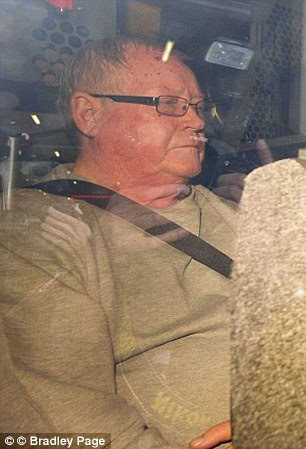 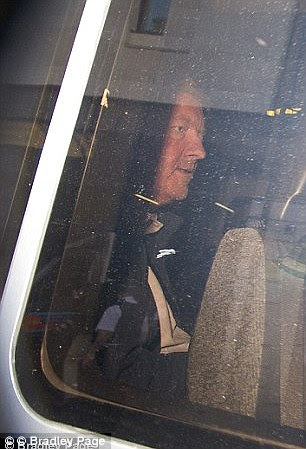 +11
John Collins, left, and Paul Reader, right, who have appeared in court in connection with the jewellery heist 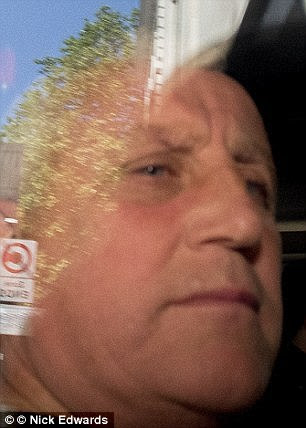 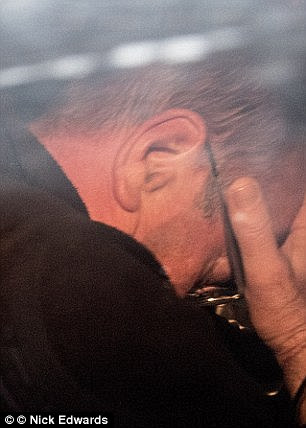 +11
Also to have been charged in connection with the raid are Daniel Jones, left, and Carl Wood, right 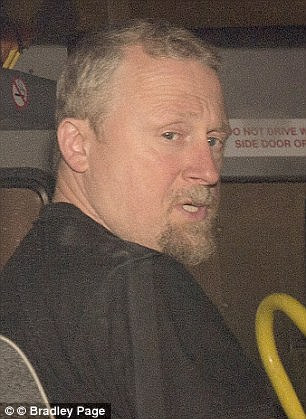 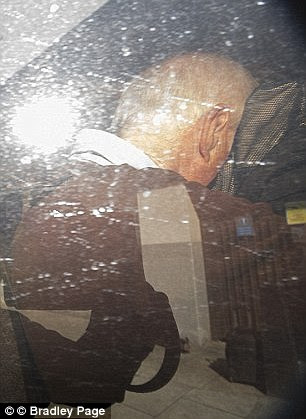 +11
Hugh Doyle, left, and Brian Reader, right, are taken to court last month to appear in connection with the Hatton Garden heist
The raid over the Easter weekend saw thieves break into the vault at Hatton Garden Safe Deposit Company in London's jewellery quarter.
Officers believe they entered the building, which houses a number of businesses, through a communal entrance before disabling the lift so they could climb down the lift shaft to the basement.
It is thought that they then forced open shutter doors and used a drill to bore a hole 20in deep, 10in high and 18in into the vault wall.
Once inside, the thieves ransacked 73 safety deposit boxes, taking millions of pounds worth of goods.