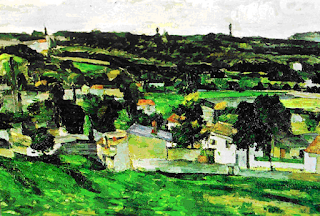 There has been much chatter recently about the Cezanne stolen from the Ashmolean Museum on New Years eve 1999-New Years day 2000.
Rumours it was being held in the North of England, Newcastle was mentioned as well as the usual rumours of it being held as collateral.
Currently it is allegedly being held in the Republic of Ireland and the price for recovery is 20,000 euros. Just 0.2% of the current value of £8 million.
The Ashmolean Museum has refused to offer any reward or fee for recovery and Police have refused to engage with Charlie Hill other than if he is willing to just give names, location etc, whereby Police can go arrest a suspect and recover the Ashmolean Cezanne and certainly not pay a single penny for that recovery.

Charlie Hill has finally succumbed to the Dick Ellis, of (QUINTONS FARM HOUSE GROVE LANE ASHFIELD STOWMARKET IP146LZ)
format of setting up people and was trying desperately to gain a glimpse of the Cezanne so Police could swoop and recover it and arrest those within a mile radius.
Sadly, for Charlie Hill and the Ashmolean Museum, this latest sting attempt, according to sources at the BBC, failed and the Cezanne remains elusive as ever.

So, if the news had broken the Ashmolean Cezanne had been recovered and arrests had of been made, those involved would only have had themselves to blame, as it has been pointed out time and time again

"There is no reward, no fee, no money at all for the recovery of the Ashmolean Cezanne and anyone thinking they can get any kind of payment is in for a rude awakening and will be arrested, charged and taken through the courts"

Anyone purporting to represent the Ashmolean Museum, Insurance company etc is always going to be Undercover Police and as soon as there was the slightest glimpse of the Ashmolean Cezanne or the whereabouts of the Ashmolean Cezanne had of been deduced, Police would have swooped and arrests would have followed.
This is common knowledge amongst the art crime underworld and has proven the case time and time again, so Art Hostage is certainly not revealing anything secret or covert.

Take this failed attempt as a warning that there are no rewards, no fee, no payments of any kind for the recovery of stolen art.
The recent civil court case of the Da Vinci Madonna proved beyond all reasonable doubt, the days of payments for recovering stolen art are well and truly over.