Antiques burglars who targeted elderly and vulnerable jailed for 19 years 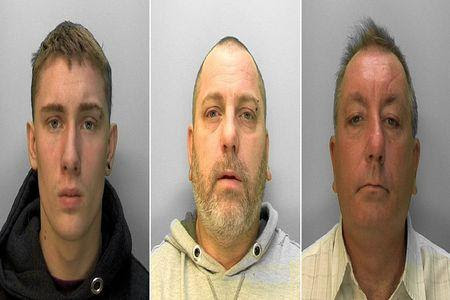 BURGLARS who stole cherished antiques from the homes of elderly Alzheimer’s sufferers while they slept have been jailed for a total of 19 years.
Paul Ansbro used his antiques business to identify vulnerable victims living in detached rural houses, so that tattooist Steven Abberley and his teenage son Mason could break in and steal valuable belongings.
The goods, which ranged from paintings to china to silver trinket boxes, were deemed to be worth more than £120,000.
Only £1,000 was recoverable, the rest having disappeared to fund the gang’s drugs and gambling habits.
Sentencing at Hove Crown Court, Judge Anthony Niblett told the men they faced long sentences due to the seriousness of the burglaries.
Steven Abberley, 42, of Findon Close, Hove, was sentenced to nine years for 12 counts of burglary. The judge considered the involvement of his son a “significant aggravating factor.”
Paul Ansbro 55, of Westbourne Gardens, Hove, was jailed for seven and a half years for three counts of handling stolen goods and four counts of burglary.
Mason Abberley, 19, of Ventnor Villas, Hove, was ordered to spend two and a half years in a young offender’s institution for committing eight counts of burglary, which the judge considered the minimum possible sentence given the younger man’s more junior role in the enterprise.
The judge praised the “extremely thorough and detailed police investigation”, and singled out Detective Constable John Stadius, and analyst Helen Crunden for praise.
The case files included more than 4,000 pages of data and drew on forensic analysis, shoe prints, identification and recovery of stolen items and number plate recognition in order to track down and arrest the perpetrators.
In mitigation, defence lawyers pointed to letters written by the defendants and their families, to a lack of previous convictions for acquisitive crimes, and to Ansbro’s and Steven Abberley records as law-abiding businessmen.
Despite not physically taking part in the burglaries, Ansbro’s role in tipping off the Abberleys was singled out for particular condemnation.
Judge Niblett said: “I think targeting vulnerable and elderly people, those with Alzheimer’s, those he knew had valuable antiques in their home and he was tipping off the burglars; I think it’s worse.”
The 12 burglaries took place between December 31, 2013, and February 4, 2014.
CRIMES HELPED PAY FOR GAMBLING AND DRUGS
AHEAD of his sentencing for multiple counts of burglary, antiques dealer Paul Ansbro was described as a “failed businessman, a failed gambler, and a man whose reputation for honesty built over 30 years stands in tatters.”
But the words of mitigation from Ansbro’s barrister were not enough to spare him a significant seven-and-a-half-year sentence for his role in the campaign of burglaries.
It was an addiction to gambling which had led the Hove man into criminality, following a “spiral of decline”.
Treasured possessions and family heirlooms, stolen from sleeping elderly owners, are now lost forever, sold cheaply to fund Ansbro’s gambling addiction and Steven Abberley’s cocaine debts.
Judge Anthony Niblett said the insignificant funds recovered were proof the proceeds of the burglaries, items collected over years and generations, were “frittered away”.
Only £435 was recovered from Steven Abberley’s £121,600 proceeds, and £675.35 from Mason Abberley’s £94,000.
A nominal sum of £1 was confiscated from Paul Ansbro who had no assets, everything he once owned already forfeited to the bank due to massive gambling debts.
The court heard Abberley burgled an 87-year-old woman with Alzheimer’s, and stole Royal Doulton china, the result of a lifetime of travelling and collecting.
He and his son took artworks lovingly painted by the deceased wife of an 84-year-old man with Alzheimer’s, now terrified of what might have happened if he had bumped into the burglars.
Many victims have live-in carers who are now similarly traumatised.
During the sentencing, Judge Anthony Niblett said: “The Items stolen were of huge monetary and emotional value. These were dearly loved and cherished possessions.”
He said to Steven Abberley: “You must have known what you were doing was terribly wrong and you seem to have carried out these offences as a professional burglar would.”
Abberley, who had no previous convictions, and had owned a tattoo parlour, cried in the dock as he was sentenced.
The court heard he suffered physical and mental abuse at the hands of his wife and turned to cocaine, leading him into a spiral of addiction, debt and criminality.
His barrister said Abberley had made two attempts on his own life and expressed genuine remorse.
Art Hostage Comments:
Whilst not excusing these crimes, this seems a very harsh sentence if we look at previous sentences for antiques theft.
Graham Harkin, with many previous antiques related convictions, burgled Firle Place and stole over £1 million in porcelain as well as other thefts from country houses and even tried to ransom back a Tompion clock worth £200,000.
He got nine years jailtime.
http://arthostage.blogspot.co.uk/2011/03/stolen-art-watch-graham-harkin-firle.html

Furthermore, Paul "Floppy" Ansboro pleaded guilty which should have given him a third off and in mitigation his beloved mother passed away recently, as well as Ansboro having no previous convictions.

Doris Ansbro
ANSBRO DORIS Peacefully on the 16th November 2015. A loving mum of John, Paul and Maria, a nan and great nan who will be sadly missed by all her family and many friends.
There are grounds for an appeal on the basis, severity of sentence, given the fact previous sentences handed down for much more valuable antiques thefts that were silmilar, if not less. Worth taking a look at sentencing guidlines as this seems like the top end?

Worth also noting two other stories in the argus about criminality, one of fraud involving millions, and the other a gang of youth burglars, see below and compare sentences with those given to Paul Ansboro & co:

Fraud:
http://www.theargus.co.uk/news/14143221.Four_and_a_half_years_for_greedy_investment_banker_in_tax_fraud/
Posted by Art Hostage at 7:22 am