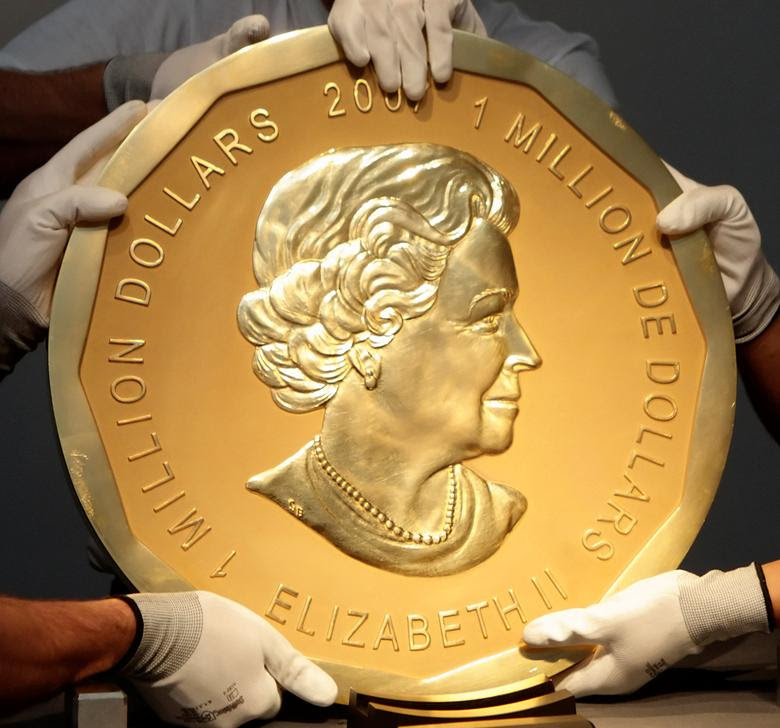 FILE PHOTO - Picture taken in Vienna, Austria on June 25, 2010 shows experts of an Austrian art forwarding company holding one of the world's largest gold coins, a 2007 Canadian $ 1,000,000 ''Big Maple Leaf''.
A Canadian gold coin named "Big Maple Leaf" which bears the image of Queen Elizabeth II was stolen in the early hours of Monday morning from Berlin's Bode Museum.
The coin is made out of pure gold, weighs about 100 kilos and has a face value of around $1 million (794,344.27 pounds).
"The coin was stolen last night, it's gone," museum spokesman Markus Farr said.

Given the high purity of the gold used in the coin, its material value is estimated to be $4 million.
The museum said on its website that the coin was issued by the Royal Canadian Mint in 2007 and that it was featured in the Guinness Book of Records for its "unmatched" degree of purity.
The coin, with a diameter of 53 centimetres and 3 centimetres thick, was loaned to the Bode Museum in December 2010.
Police said it was probably stolen by a group of thieves who entered the museum undetected through a window, possibly with the help of a ladder.
we have so far we believe that the thief, maybe thieves, broke open a window in the back of the museum next to the railway tracks," police spokesman Winfrid Wenzel said. "They then managed to enter the building and went to the coin exhibition."The coin was secured with bullet-proof glass inside the building. That much I can say," Wenzel added.
"Neither I nor the Bode Museum can go into detail regarding personnel inside the building, the alarm system or security installations."
The Bode Museum has one of the world's largest coin collections with more than 540,000 items. 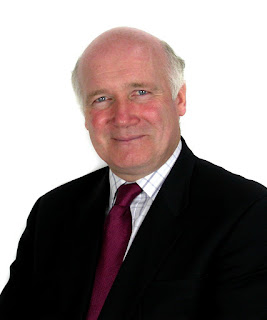 Cops hunt thieves who stole £2.5million worth of art from Bulmers cider tycoon’s mansion while he was on luxury Barbados holiday

Gang fled with art, jewels and silverware of sentimental value to Esmond & Susan Bulmer in horror burglary eight years ago
COPS have issued a renewed appeal for information on thieves who stole art worth £2.5million from the home of an ex-Tory MP and cider tycoon eight years ago.
Esmond Bulmer, 81, of the Bulmers cider dynasty, and his wife Susan, 75, were on holiday together in Barbados when the raiders broke into their decadent mansion and made away with the luxury goods.


They are alleged to have threatened to pour bleach over house-sitter Deborah Branjum, and tied her to a stair banister before fleeing the property with the priceless haul.
Some of the gang are believed to have fled with the paintings, while others loaded the boot of the Bulmers’ Mercedes with a safe with £1million worth of jewellery inside.


Up to 15 well-known artworks, along with jewels and silverware were stolen in the March 2009 raid.
The shocked house sitter was found at their house, The Pavilion near Bruton, Somerset, 18 hours after the break-in.
Cops have arrested 11 men in connection with the aggravated burglary.
All remain on bail pending further investigation.
The latest arrest was a 42-year-old man from Small Heath, Birmingham.
The unnamed man was arrested on suspicion of conspiracy to commit fraud, and conspiracy to handle criminal property.


Officials have previously arrested suspects in Gloucestershire, West Midlands, London and the South East in connection with the heist.
Renewing their appeal for witnesses eight years on, Avon and Somerset Constabulary said all but one of the 15 paintings taken have been recovered by private investigators.
The outstanding painting is Sir John Lavery’s “After Glow Taplow.”
The jewellery and silverware taken in the heist have great sentimental value to the Bulmer family.


Mr Bulmer is thought to have made £84million when he and his family sold their stake in the family’s Hereford-based Bulmers cider-making business.
Upon getting one piece of art back in 2015, Mr Bulmer, who was MP for Kidderminster between 1974 and 1983, said he was “thrilled”.
Police are appealing for jewellers and antique and second-hand shop owners who may have been offered the items to come forward.
Anyone able to help should call the Operation Shine investigative team via 101, quoting reference Op Shine 3559609.

If you can leave a contact email . Many thanks