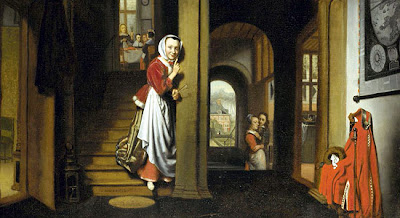 Just as the Dutch government was hoping to discourage more claims for restitution of art looted during World War II, the heirs of a Dutch Jewish art dealer have filed one of the largest claims to date of paintings now held in Dutch museums.

Four heirs of the dealer, Nathan Katz, who died in 1949, say that he was the rightful owner of more than 200 works of art recovered in Germany at the end of the war and handed over to the Dutch government.

The claimants are Katz's four children: Sybilla Goldstein-Katz, who lives in Florida, her brother, David, and her sisters Margaret and Eva, who live in Europe.

The details of the claimed restitution have not been made public, but Dutch museum directors said the works in question include paintings by 17th-century Dutch masters, among them Jan Steen, Gerard Dou, Jacob van Ruysdael and Nicolaas Maes.

Some works are by Flemish and Italian artists. Many are on display in some of the country's major museums, such as the Rijksmuseum in Amsterdam, the Mauritshuis in The Hague and the Frans Hals Museum in Haarlem.

The Ministry of Culture said the claim was filed in March this year for 227 items: 225 paintings and 2 tapestries. But Bob van het Klooster, a ministry spokesman, declined to provide details. The matter became known Friday when museum directors were notified of the claim.

The spokesman said the claim would now be studied by the Restitution Commission, a group of experts set up in 2001 to advise the government on the return of cultural property that was lost, sold or stolen after the Nazis invaded the Netherlands.

The application filed by the Katz heirs is even larger than the claim for 202 paintings made by the heirs of Jacques Goudstikker and finally resolved in favor of the heirs in 2006. But it also appears to be less clear cut.

Nathan Katz and his brother, Benjamin, had a gallery in Dieren, their hometown in the east of the country, and another in The Hague. They reportedly continued doing business after the German occupation of the Netherlands in May 1940. Researchers for the Restitution Commission said the brothers sold many works to Alois Miedl, who was buying art for Hermann Goering and other Nazi leaders.

Tina Talarchyk, the lawyer who is representing the Katz heirs, said that when Nathan and Benjamin Katz wanted to flee the Netherlands in early 1941, they traded several sets of paintings for visas, and in this way enabled 65 relatives to flee the Netherlands for eventual safety. One poignant detail, she said, was that Katz's mother, Lena Pelz Katz, was released from Westerbork, a Dutch concentration camp for Jews, in exchange for a Rembrandt painting through the intervention of Miedl.

Nathan Katz and his family left in February 1941, after he obtained German permission to take his family via Frankfurt to Switzerland.

Although the Dutch government in exile had decreed that citizens could not trade with the enemy, many Dutch art dealers, Jews and non-Jews, sold works to eager German collectors who circulated wish lists in the first few years of the war.

Dutch traditional painting was sought after because the Nazis did not consider it "degenerate art."

After the war, the Dutch government returned 28 paintings that the Katz brothers had claimed. Among them was a Rembrandt painting called "Portrait of a Man," which was believed to be used to buy the freedom of the Katzes' mother.

Evelien Campfens, a member of the Restitution Commission in The Hague, said the claim of the Katz heirs "will be a complex case, with many different aspects to it," adding, "It will take time."

She said the Katz brothers were important dealers involved in many transactions and many important paintings passed through their hands. The commission was notified of the claim in June, she said, and still has a large backload of other applications for restitutions.

Talarchyk, the lawyer, said the family discovered the Dutch restitution program several years ago while on a visit to the Netherlands. They filed for the return of one painting in 2003 as a test case and only received a reply in 2006. Their full claim was made in March to meet a government deadline of April 4.

They were assisted by Rudi Ekkart, a well-known Dutch art historian and director of the Agency for Origins Unknown, which has helped the government set standards for its restitution policy and compiled inventories of the thousands of cultural objects lost by their owners.

Enough already with disgusting Dutch Anti-Semitic rhetoric, just give back the unclean art that is dripping in the blood of 6 million innocent men women and children.

When the truth comes out, the Dutch will have to face the fact that they are the current handlers of the largest amount of looted, stolen, and purchased cheaply by threats, art in the whole world.

Yes it could even be larger than the spoils of war held in Russia !!

The whole subject of wartime looted and stolen art is something that needs to be addressed once and for all.

The sheer arrogance and elitist rhetoric coming from the Dutch govt reminds us of the dark days of German Sonderweg.

It is sad that the Dutch are lagging behind the Germans, who are slow enough on their own, to restore unclean art to the heirs of those who lost so much, in many cases their lives.

It must be said that aside from these high profile art loss cases there are many thousands of heirs that are still being deprived of their inheritance, both art and cash, stolen from the accounts of innocent victims of Nazi Germany, and it seems Nazi Netherlands, Himmler's Holland !!

However, I am certain there are many millions of honourable, decent, Dutch people who are not represented by the actions of the Elitist, resentful, prevaricating Dutch Government Officials.

We are led to believe that The Netherlands/Holland is a tolerant, peace loving, multi-cultural society, where justice is such, whereby even criminals are given many chances to repent and reform.

In light of that how about the Dutch people demand the dark days of Nazi collaboration be confined to history by gestures of goodwill, a speedy resolution to all restitution cases.

Failure to do so will inevitably lead to a slow drip drip affect of shame for past actions, and in the end all these contested artworks will be handed back.

Instead of acting in a re-active manner, as govt's seems to always do, act in a pro-active manner, thereby being able to control the publicity and turn a negative into a positive.
Posted by Art Hostage at 9:17 pm