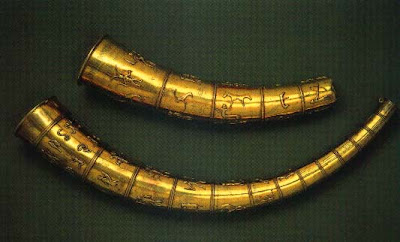 Danish police have recovered a pair of gilded horns a day after the national heirlooms were stolen from a museum in the former Viking capital of Jelling in Jutland.

Police said they had arrested four people, two men and two women, after a tip and had recovered the horns and some other artifacts which were stolen on Tuesday.

At least one item was still missing, police said.

The horns were reproductions of two 5th century solid gold horns that were stolen 205 years ago and melted down, despite being national treasures.

The reproductions of the Golden Horns of Gallehus were made in the mid-19th century.

The original horns were made of about 3kg of solid gold and were covered with soldered figures and carvings of beasts believed to be from Celtic mythology.

They were unearthed in Gallehus in Jutland in the 17th and 18th centuries and were stolen in 1802 by an indebted watchmaker who destroyed them to make shoe buckles and other trinkets.
Art Hostage comments:
Credit to the Good Old Sydney Morning Herald for the heads up.

Would be really nice if they could report the safe recovery of the stolen Cavalier, which does not have a reward offered, in a courageous move by the NSW Gallery.

No-one can call Edmund Capon, the Director of the Art Gallery of New South Wales a Chicken !!

Just goes to show that offers of rewards are not always needed to secure the return of stolen iconic artworks.

Behind the scenes credit may be given to the informant, quietly, out of the media spotlight.

A glimmer of hope in the never ending fight against organised high value art theft.


It is worth noting that these Guldhornene are regarded as sacred by the Public in Denmark, so any apprehension in giving Police information was dispelled from the get-go., see link below:

A rare good news story in a sea of bad news regarding art theft.

http://en.wikipedia.org/wiki/Tumbarumba for enlightenment.
Posted by Art Hostage at 1:52 pm