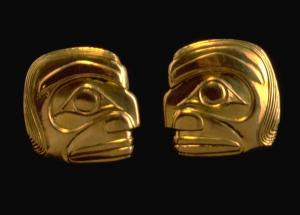 RCMP believe the 15 pieces of artwork stolen from UBC's Museum of Anthropology are still in the Lower Mainland, and hope to speak once more to a tipster who didn't leave a name.

"We want to appeal to a tipster who provided us with information in the past, as we believe this person may have more information that could further the police investigation. We're talking here about national treasures," said Const. Annie Linteau.

Twelve works of gold jewelry by Haida artist Bill Reid and three Mexican necklaces made up of gold coins were stolen from the museum overnight May 23.

Police now believe the thief or thieves may be trying to sell the artwork through a network of criminal associates in Greater Vancouver, but investigators also haven't ruled out the possibility international art thieves may be involved, said Linteau.

The investigators believe it's unlikely the pieces will be melted down, because of their value in the art world, Linteau said.

The museum's insurance company has substantially increased the $50,000 reward for information leading to the recovery of the pieces according to Linteau, but she could not say by how much.

But police hope the growing reward will result in another break in the case, she said.

VANCOUVER (NEWS1130) - There is a significant update in the art heist from UBC on May 24th. Police now believe the person or people responsible for the theft are from the Lower Mainland, and may be trying to sell the pieces through a network of criminal associates in the Vancouver area.

The RCMP would also like to speak to an anonymous tipster who they've already talked to because they think this person may have more information.

A dozen gold pieces created by Bill Reid and worth millions of dollars were stolen from UBC's Museum of Anthropology on May 24th.

UBC has offered a $50,000 reward, and now the school's insurance company is also offering a "significant" reward, with conditions, for information leading to the recovery of the pieces.

Memo to the Bill Reid Thieves:

As you can see everybody wants a piece of this action, so, the safest thing is to now deposit the Bill Reid items with a Lawyer for safekeeping during the negotiations.

Art Hostage did request this earlier as I knew there would be a scramble to inform on the culprits.

Right, Art Hostage recommends the Lawyers Michael Morse or Dennis Morris, who are in Toronto, first they can offer secrecy, and also it is far away enough from British Columbia to manage safely. Dennis Morris took possession of the stolen Ken Thompson Ivories in 2004 and handed them back without anyone getting arrested, client attorney privilege !!

You know by now that this is radio-active stolen art and without the Lawyer there will only be arrests and no reward.

However, Art Hostage has been contacted by a senior member of the Canadian Underworld they say the original thieves may have already sold these Bill Reid icons and the buyer is ready to deal.

If that is the case, then, read this and learn !!

Now you have the Bill Reid Icons trick is to get them back without being arrested.

No matter if you say you bought them to hand back, this needs to be done by your most trusted Lawyer, who can liaise with Michael Morse or Dennis Morris in Toronto, thereby detaching you even further.

The main thing that really needs to be done is get these Bill Reid icons off the street and in the safe hands of a trusted Lawyer, I mean it, the longer these Bill Reid Icons are on the street the less chance of anyone getting the reward money.