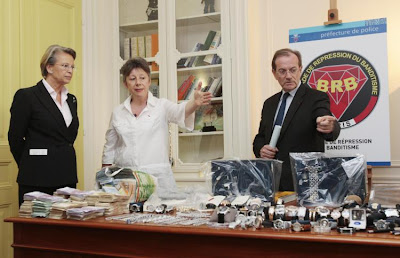 http://www.theepochtimes.com/n2/content/view/18571/
PARIS—It took just a little more than six months to the French Brigade for the Repression of Banditry (BRB) to track down the gang that stole 85-million euros (US$120 million) worth of jewels on December 4, 2008, in Paris.
Nicknamed the “World’s best robbers” and “Gentlemen robbers” by a sometimes easy-worded press, the gang’s loose and relaxed mode of action had created a sensation: in broad daylight, the robbers quietly raided the prestigious Harry Winston story near the Champs Elysees—some of them dressed as women.

They knew precisely the name of the employees, their personal address, the location of the most valuable jewels, and they cared little about operating in the most heavily guarded district of French capital city.

British insurance company Lloyd's of London had offered US$1 million to anyone who would help recover the stolen jewels.

80% of all jewels—rings, necklaces, luxury watches—have been retrieved, announced Helene Dupif, head of the BRB, at a press conference, while 22 suspects, aged 23 to 65, remain in custody.

“Most of these people have a very heavy [judiciary] past, they are suspected to have committed other thefts and to gradually have taken more and more guts,” AFP quoted Dupif. “The good point however is that in the long run they have been making mistakes, and we did exploit these.”
The starting point of the “jackpot” discovery by French police was the surveillance of one of Harry Winston’s security agents suspected to have taken part in the theft. After months of surveillance, the French police decided to act upon authorization from Judge Corinne Goetzmann right when a deal was to be made between the robbers and a buyer arriving from Israel.

During their raid on Monday, June 22, BRB forces also found nearly 1 million euros in 50 and 100 euro bills, meaning that part of the jewels have already been sold. An AK-47 assault rifle and several guns were also found in the Paris 18th district apartment used by the gang.

Le Monde newspaper reports that the owner of the house where most jewels were found is a 45 year-old French citizen, probably the group’s leader. This comes to most as a surprise since the Pink Panthers, a gang from the Balkans, was widely suspected since Winston employees had testified that the cross-dressed gang members had a foreign accent. In the end, according to currently available information, all would be French natives.

“Let us acknowledge the quality of their work,” said Christian Flaesch, head of the Paris judiciary police, interviewed by Le Monde newspaper. “These may be the same guys, or be part of the same network as those who committed the first robbery at Winston,” he said, referring to a previous US$20 million theft in the same Harry Winston story in October 2007.

It is a new success for the BRB. In the past months, the elite squad successfully arrested suspects of previous spectacular robberies. In March, they caught a woman who had stolen a prestigious ring from The Maison Cartier and replaced it by a fake one in a luxury store at Place Vendome in Paris, and in May, two suspected members of the Pink Panthers gang were arrested.

The December 2008 Harry Winston robbery is the most important in French history, only second to the world record—a US$100 million diamond theft in Antwerp, Belgium, in 2003.
Art Hostage Comments:
Don't be too quick to dissmiss a Modus Vivendi between these guys and the Pink Panthers.
When the truth comes out about the circumstances of this heist and the recovery process it will leave the public wondering "who are the good guys and who are the bad guys !!!"
-
Update:
-
Fourteen people have been referred to prosecutors in Paris Thursday and Friday in the investigation into the robbery record (85 million euros) to the Harry Winston jewelry in Paris, it was learned from a judicial source.
Posted by Art Hostage at 8:52 pm