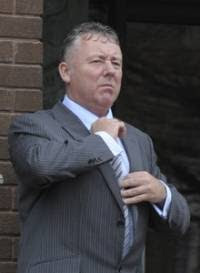 Lee Herbert Collins, the notorious Brighton Antiques Mafia Soldier was found guilty yesterday at Harrow Crown Court of theft from elderly people regarding high value antiques. He was sentenced to 16 months jail-time and an extra 4 months jail for breaching a previous suspended sentence for antiques theft. 20 months jail in total.

This means Lee Herbert Collins will serve 5 months jail and 5 months on electronic tag and the remainder on license.

Lee Herbert Collins will be released January 2013 from HMP Ford Open jail, where he is headed within the next couple of weeks.

This was a re-trial as the first trial was deadlocked when the jury could not reach a unanimous verdict on May 4th 2012.

you dont know anything if you did the wrong people would not keep being punished.

He was sentenced to 16 months jail-time and an extra 4 months jail for breaching a previous suspended sentence for antiques theft. 20 months jail in total. Blinds Brighton