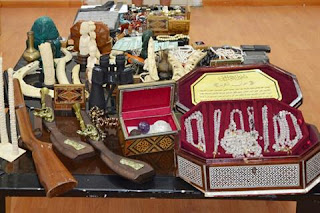 Thief who stole $10 mln in valuables arrested in Beirut


BEIRUT: Police have arrested a thief who stole $10 million in valuables from safes across Lebanon.
A statement released Tuesday by the Internal Security Forces said judicial police in Beirut’s southern suburb managed to apprehend a 48-year-old Syrian national who was identified by his initials M.D.
It said a quantity of looted items – jewelry, precious stones, precious watches, antiques, cell phones, pistols and cash – were confiscated from the burglar. They were estimated at $10 million.
“Under interrogation, he confessed that he heads a gang of robbers that has stolen 24 safes from homes and commercial enterprises,” the police statement added.
It said police were in pursuit of the other gang members.
M.D. was referred to relevant judicial authorities and the stolen items were returned to their owners, ISF said.


Thousands of pounds worth of jewellery stolen in raid

RAIDERS struck at a house in Godshill and stole thousands of pounds worth of jewellery.

Thieves forced the back door open and ransacked the property before stealing a safe, containing a significant amount of expensive jewellery, including a Cartier watch, Dior earrings, Art Deco watch and 12.5 carat diamond.
Other items stolen include a 27 carat diamond necklace containing different shaped diamonds, earrings and other necklaces.
Detectives in the New Forest are investigating the burglary, which happened between 6pm and 10pm on Wednesday, September 26.

The stolen jewels include one-off items that will not be easy to dispose of, say police.
Investigating officers are appealing to jewellers and other traders to be wary of anyone who makes contact with them offering to sell expensive-looking jewellery.
A Hampshire Police spokesman said: “Officers are also appealing for public assistance in helping them to identify the offenders.
“Has anyone been to the area of Godshill recently and seen a vehicle or people in suspicious circumstances?
“Did anyone pass through the village of Godshill and see a vehicle arrive or leave the area in a hurry?
“Has someone offered you expensive jewellery for sale or has someone you know suddenly shown you some expensive jewellery?”

Police are advising householders to use timer switches to activate lights in the house or to activate radios or televisions to give the impression that someone is at home.
As the nights are drawing in, residents are being reminded to pull the curtains or blinds to prevent people looking into their homes from outside.

Family hopes the heirloom will be found

DELTA (NEWS1130) - Delta Police are hoping you'll keep an eye out for a piece of valuable art that may end up sold online or at a flea market.

Constable Ciaran Feenan says a 200-year-old Japanese "Kakejiku" wall hanging scroll -- a family heirloom -- was stolen from a home during a break-in mid-August.

"We believe that it has quite a significant value to it. A dollar figure, I don't know. However, we think that the value is more for the family and what it means to them," says Feenan.

It was stolen from a home on Sunwood Drive near 64th Avenue.

The scroll is about six feet tall and two feet wide. It has wood on the top and bottom; the rest is made of thick Japanese paper. Oil paint depicts a landscape scene with a man looking up at a mountain. On the bottom left corner, Japanese characters are stamped in red ink.

£50,000 of jewellery and currency stolen in Sutton

Burglars stole a safe containing £50,000 worth of currency and jewellery.

The property in York Road, Sutton was broken into on Wednesday, October 10 between 7.30am and 4.10pm.
They gained entry by smashing a window into the study.
The safe, which was fixed in a bedroom wardrobe, contained Asian jewellery, English and foreign currency as well as passports and bank cards.
These cards were used later the same day around 5pm to withdraw a total of £700 from cash machines at NatWest in Streatham High Road. Two laptops were also taken.