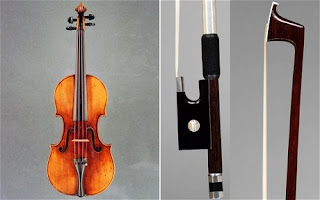 A violin recovered during a police raid in Bulgaria is not the 17th Century Stradivarius which was stolen from a musician in London, officers said.
The £1.2m Stradivarius and two bows were stolen from classical musician Min-Jin Kym while she was in a cafe at Euston station in November 2010.
Experts believe the recovered violin is a replica used for training, British Transport Police (BTP) said.
John Maughan admitted theft in 2011 but the 1696 violin has not been found.
'Low resale value' The Korean-born musician, who has played with the Royal Philharmonic Orchestra, was due to board a train to Manchester and was buying a sandwich at Euston station when the case containing the instrument was taken from her.
The stolen case also contained two bows - a Peccatte bow valued at £62,000 and another made by the School of Bazin which was valued at more than £5,000.
Maughan, of no fixed address, was jailed for four years. Two boys, then aged 15 and 16, also admitted the theft in March 2011.
A £30,000 reward is being offered by insurance company Lark Insurance Broking Group for information leading to the recovery of the "irreplaceable instrument".

Det Ch Insp Simon Taylor said: "After a violin bearing Stradivarius markings was recovered in Bulgaria on Wednesday 27 February, we worked closely with underwriters, the Serious Organised Crime Agency and Bulgarian police, through Interpol, to establish if it was the 1696 Antonio Stradivarius taken from Euston in 2010.
"Experts examined the instrument in Sofia and it is thought to be a replica training violin, made in either Germany or the modern-day Czech Republic no more than 100 years ago."
He said that although the violin and the bows are "extremely valuable, their uniqueness means their sell-on value, in monetary terms, is very low".
"They can't be sold for anything near to their true value because an arts and antiques or instrument dealer would easily recognise them as stolen property".

Art Hostage Comments:
Warning, Warning, Warning
Now we know this violin is a fake, from now on anyone, I repeat anyone offering money or the bogus reward for the real Stradivarius violin will be Undercover Police and as soon as the violin is revealed Police will swoop and arrest all those within a five mile radius.
If you have information as to the possible whereabouts of the real Stradivarius violin then contact Art Hostage who will make sure you will be told the truth of how to go about collecting a fee for recovery, not the bogus reward offer, and if no fee is available then you will be told of that fact before you commit yourself and fall foul of the inevitable undercover Police sting operation. Lark Insurance are under strict instructions to pass any information they receive about the Stradivarius violin straight to Police so remember that before contacting Lark Insurance Broking Group.
Posted by Art Hostage at 5:14 pm