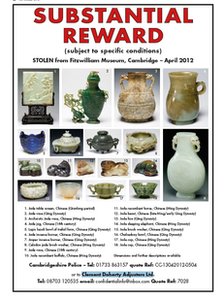 A man charged in connection with the theft of Chinese art worth millions of pounds from a museum has been cleared.
Thomas Kiely, 21, of Giraud Street in Tower Hamlets, London, was found not guilty of conspiracy to commit burglary by a jury at Cambridge Crown Court.
The 18 artworks were stolen from the Fitzwilliam Museum in Cambridge last April and have still not been traced.
Four men were sentenced over the burglary in September.
Mr Kiely was acquitted of the charge on Friday.
Police have since renewed their appeal for information regarding the whereabouts of the missing items - mainly jade artefacts from the Ming and Qing dynasties.
Det Insp Becky Tipping, of Cambridgeshire Police, said: "Sadly the items, which are of huge cultural significance, have still not been traced but we still have a team of detectives working to trace [them].
"The museum would dearly love to secure the return of these artefacts and there is a reward on offer to anyone who has information which leads to their recovery."

Detectives have launched a fresh appeal for information in a bid to recover priceless Chinese artefacts stolen from a Cambridge museum.
Eighteen Chinese artefacts Ming and Qing dynasties were taken by a gang of burglars from the Fitzwilliam Museum on April 13, last year.
Three people have each been jailed for six years for their roles in the burglary, a teenage boy was also locked up after admitting burglary.
A substantial reward has been issued by the loss adjusters, for information which leads to the recovery of the stolen property.
Detective Inspector Becky Tipping said: “Sadly the items, which are of huge cultural significance, have still not been traced but we still have a team of detectives working to trace those items and would urge anyone with information to call police.
“The museum would dearly love to secure the return of these artefacts and there is a reward on offer to anyone who has information which leads to their recovery.”
The loss adjusters have issued a “substantial” reward for information which leads to the recovery of the stolen property.

Anyone attempting to offer information that leads to the recovery of these Chinese  Jade artworks will come under scrutiny, 24/7 surveillance, and ultimately arrest. There is no reward on offer just a bogus offer of a "Substantial reward", meaning a token gesture, a few hundred pounds, maybe a couple of thousand pounds, if the person stepping forward sets up, goes along with a sting operation to entrap and expose themselves to a violent blow-back from those who will end up arrested. The only thing that awaits anyone who tries to offer information is, arrest, criminal charges, conviction and jail time. Therefore the only conclusion is to contact Art Hostage for the only legal, legitimate pathway forward.
Posted by Art Hostage at 1:44 pm