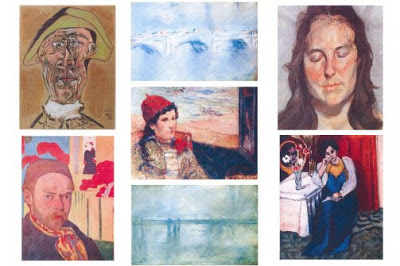 Stolen artworks from Picasso, Money and Matisse may now just be ashes

INVESTIGATORS are analysing ashes found in the house of a suspect charged for the Dutch museum heist amid fears the seven artworks have been burnt.

"Tests are underway, they will take some time," Gabriela Neagu, a spokeswoman for the Romanian prosecutor's office, told AFP.
"The ash tests are a stage in the ongoing probe, investigators have to take every hypothesis into account", she added.
Investigators fear that the suspects may have set fire to their haul after realising that they could not sell the paintings, which included works by Pablo Picasso, Claude Monet and Henri Matisse.
The ashes were taken from the house of Olga Dogaru, mother of one of the suspects and herself charged with "complicity to theft."
Her son's lawyer, Doina Lupu, said the tests "were inconclusive" so far.
Ms Dogaru was arrested in March after her house in eastern Romania was thoroughly searched. An empty suitcase which had presumably served to store the stolen paintings was unearthed during the operation.
Seven Romanians, including Ms Dogaru, have been charged in connection with the theft of the paintings from Rotterdam's Kunsthal museum on October 16.
Experts have estimated their value at more than 100 million euros ($133 million).
The heist gripped the Netherlands and the art world as police struggled to solve the crime, despite putting 25 officers on the case.
The works stolen include Picasso's Tete d'Arlequin, Monet's Waterloo Bridge and Lucian Freud's Woman with Eyes Closed. An empty space left by a painting from French artist Henri Matisse that was stolen at the Kunsthal museum in Rotterdam.

I hope those who took the supposed moral high ground and demanded no reward offer, no fee offer for the recovery of these stolen artworks are happy with themselves upon hearing this news.

Thieves have stolen art for thousands of years and will continue to do so and the best form of defense is security that means the possibility of theft is diminished.

By being rigid in not allowing any fees or rewards to be paid provokes this kind of action.

Looks like the insurance company has taken a hit to the tune of tens of millions and the public are denied the chance to admire these artworks, not to forget the Triton Foundation losing some of its most coveted artworks.

The fee charged by The Art Loss Register looks very cheap now in light of this news, so getting Chris Marinello on board from the start could, should and would have prevented this. By being so cheap, so mean-spirited and tight fisted, the net result could prove to be the loss of these iconic artworks forever !!

Still, perhaps a few outcomes of this kind will provoke the insurance industry to call for ever increased security and perhaps the loosening of monies being paid for the recovery of stolen art?
-
Sadly, the message this sends is

"When in doubt about realizing on stolen art..... destroy"