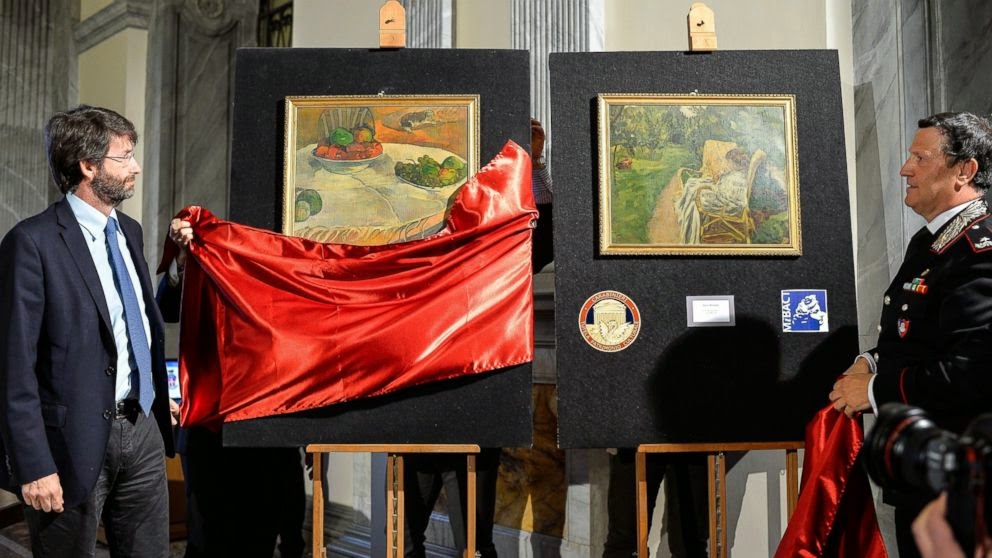 A pair of stolen masterpiece paintings valued at $50 million have been recovered after being bought at an auction for $25 and hung in an auto worker's kitchen for years.
The masterworks were described as Paul Gaugin's “Still Life of Fruit on a Table With a Small Dog” and Pierre Bonnard’s “The Girl With Two Chairs.” They were stolen from the home of a British couple in 1970.
An unnamed Fiat employee, described by police as a “lover of art,” bought the two paintings in an auction of items left in the lost and found department of the national railway. The paintings were reportedly left behind on a train from Paris to Turin and were never claimed. Railway authorities put them up for auction in 1975.
$10M Gold Coin Hoard May Have Been Stolen From Mint
The Fiat worker was unaware of their value, according to Gen. Mariano Mossa, the head of the police’s Cultural Heritage department. The Fiat employee purchased the two masterpieces for $25 at the auction. He first had the paintings hanging in his kitchen, and after he retired, he brought them back to his native Sicily.
The auto worker's son had decided to sell the paintings last year and that is when they came to the attention of police.
“The present owner of the paintings was circulating pictures of the painting because he decided to sell them. He did so in good faith, as he did not know they were stolen. That is when we became aware of them and started researching,” the spokesman for the Art Theft Squad of the Italian police told ABC News.
The paintings were stolen from the collection of Sir Mark Kennedy in England on June 6, 1970. Kennedy and his wife died without heirs without ever knowing the fate of their paintings. Press reports from that month say that three men, one posing as a policeman and the others as burglar alarm engineers duped the housekeeper, telling her they were checking the alarm system. While she made them a cup of tea, they removed the paintings from the frames.
Authorities will now have to determine who are the rightful owner of the paintings.

Stolen paintings by Paul Gauguin and Pierre Bonnard hung on an Italian factory worker's kitchen wall for almost 40 years, police have revealed.
Now worth at least 10.6m euros (£8.8m), they were stolen from a collector's London home in 1970 and left on a train in Italy, with no indication of origin.
At a lost-property auction in 1975, the unsuspecting Fiat worker paid 45,000 Italian lire (23 euros; £19) for them.
He hung them in his Turin home before taking them to Sicily when he retired. 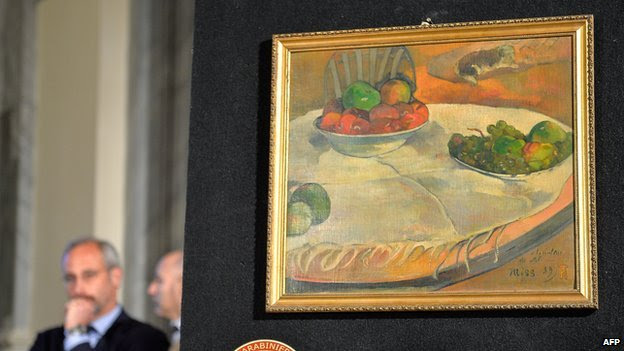 Paul Gauguin's still life is thought to be worth at least 10m euros (£8.3m)
The worker only grew suspicious about their origins when his son saw another Gauguin in a book and noticed similarities with the painting in his father's kitchen.
The man consulted experts and police were eventually alerted.
The Gauguin painting, titled Fruits sur une table ou nature au petit chien (Fruits on a table or still life with a small dog), had been painted in 1889 and was thought to be worth between 10m and 30m euros (£8.3m-£24.8m), police said.
The Bonnard, La femme aux deux fauteuils (Woman with two armchairs), is valued at 600,000 euros (£500,000).
Italian culture minister Dario Franceschini said: "It's an incredible story, an amazing recovery. A symbol of all the work which Italian art police have put in over the years behind the scenes."
Mariano Mossa, commander of Italy's heritage police, said he believed the paintings had been discarded on a train travelling from Paris to Turin after they were stolen.
"They were bought by an art-loving worker, who hung them for 40 years in his kitchen, first in Turin then in Sicily, after he retired," he added.
Gauguin was a post-impressionist master known for his creative relationship with Vincent van Gogh. His fellow Frenchman Pierre Bonnard is regarded as one of the greatest colourists of modern art.

Art Hostage Comments:
Under Italian law anyone who buys artworks from an auction in Italy gets to keep legal title despite the fact they may have been stolen. Therfore in this case there will be a dispute over legal title and that is why this bullshit story about the so called farmer buying them at auction is being used. The whole ruse would have been to take them to Italy when stolen from London and then put them through an auction thereby gaining legal title.
So don't be surprised to hear of an ongoing dispute about legal title. This has been used many times over the years to launder stolen artworks in countries with similar laws about legal title such as Belgium, Japan and Holland, where after thrirty years the legal title is gained by whomever has possession.
See this for Good Faith & Italian case law:
http://media.law.stanford.edu/publications/archive/pdf/Merryman%20Good%20Faith.pdf 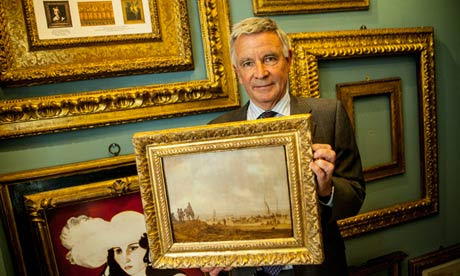 Paul Mitchell with the recovered 17th-century painting by Jan van Goyen. Photograph: Antonio Olmos for the Observer
European auction houses, dealers and collectors are failing to make adequate checks to avoid handling stolen artworks, an art lawyer has warned after recovering from an Italian auction an old master painting taken from its British owner in a burglary more than 30 years ago.
Christopher A Marinello, who specialises in recovering stolen art and resolving title disputes, said: "We do find a lot of stolen and looted artwork in civil law countries such as Italy, France and Germany. Consigners of tainted works of art often try to hide behind the good-faith purchase laws of these countries while performing little or no due diligence."
He spoke to the Observer after negotiating the return from Italy of a landscape painting by Jan van Goyen, a 17th-century Dutch painter, which was stolen in 1979. Negotiations were particularly delicate because, under Italian law, if someone buys a stolen work in good faith the buyer is sometimes entitled to keep it. Marinello was able to prove to the Italian auctioneer that the painting was one of nine pictures stolen at night by criminals who broke into the home of Paul Mitchell, an antique picture frame specialist in London. View of Lake Nemi by Joseph Wright of Derby, one of the paintings stolen from Paul Mitchell. The thieves forced open a window to enter his house. Mitchell assumed that the slight noise that he heard from downstairs was the family cat. "Police call these people 'creepers', night-time burglars who specialise in burgling people when they are in their house," Mitchell said. Describing waking to discover the theft, he added: "The anguish is a very long, deep-seated thing which never really goes away. Hardly a day goes by when I haven't thought about it."
The loss of the pictures was also painful because of their sentimental value. They belonged to his father, but had become so valuable that Mitchell could not afford to insure them for their full worth. Back in 1979, the paintings were valued at £400,000. Today the amount is well into seven figures. After the theft, Mitchell tried in vain to track down the paintings, offering a £5,000 reward for their recovery, placing advertisements in international journals and approaching a specialist art detective. But the trail went cold.
He was overwhelmed with emotion at being reunited with the Van Goyen, a beautiful beach scene painted in 1643 by a pioneer of naturalistic landscape painting. It surfaced by chance a few weeks ago after a Dutch dealer tried to buy it in Italy. Before paying for it, he decided to check the database of the Art Loss Register (ALR), which tracks down the world's stolen art from its headquarters in London. 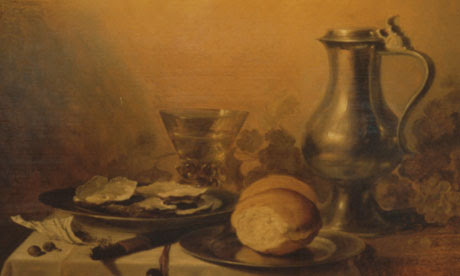 Still Life by Pieter Claesz, another of the missing paintings. Marinello, the ALR's general counsel, who has recovered £200m worth of stolen and looted art in seven years, confirmed that it had been stolen: "The Italian auction house involved did not search the work with the ALR, but the dealer did. While losing out on a potential future sale, the [dealer] protected his reputation and saved himself significant sums in legal fees defending a case over title to the painting."
Unless more dealers, collectors and auctioneers make such checks, he added, other stolen items will remain undetected. "It's the same concept as having a survey done prior to purchasing a home. Considering the values involved, why wouldn't you want to know if there were serious title issues before purchasing fine art?" 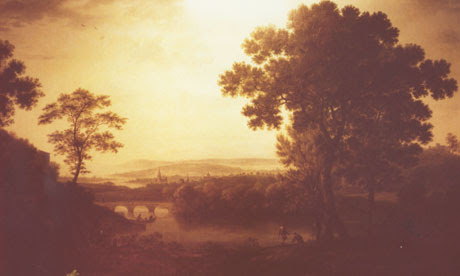 Pastoral landscape by George Smith of Chichester, which is still missing after 30 years. Asked why they had not made such checks, Marinello stopped short of suggesting that the buyers had not wanted to know about doubts over an artwork's legality: "Perhaps it's the excitement of getting a good deal."
A reward is being offered for information leading to the recovery of the other eight lost paintings, including Still Life with Oyster Shells (1646) by Pieter Claesz, and Lake of Nemi at Sunset (1780) by Joseph Wright of Derby.
Mitchell said his experience of being reunited with the Van Goyen after more than three decades will give hope to other people who have suffered thefts of their family's treasured items.
Posted by Art Hostage at 4:32 pm