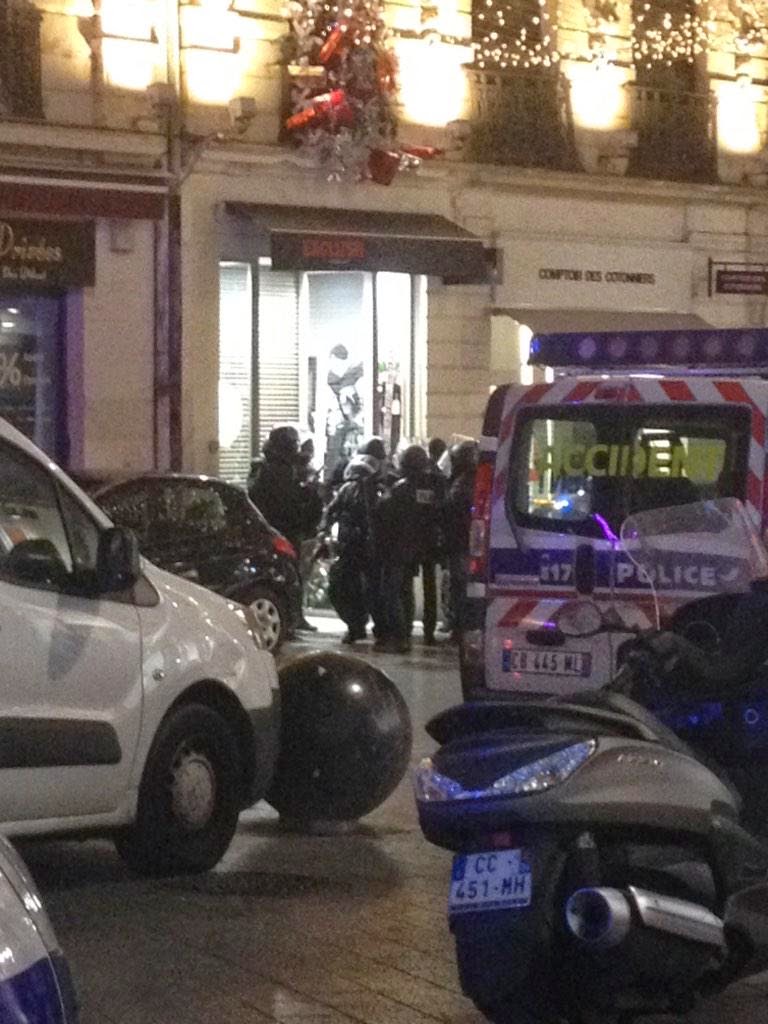 Hostage situation in a jewellery store in Montpellier, France - reports

Hostages have reportedly been taken in a jewellery store in Montpellier, Southern France. The new incident is evolving shortly after hostages were freed in Paris and Charlie Hebdo suspects killed in Northern France.
READ MORE: Charlie Hebdo suspects killed, store hostages freed - reports
According to the media, two people are being held in a shop in the center of the city. The police have surrounded the area.
There is no precise information yet about the siege. However, the media report it could be an attempted robbery which turned into hostage taking.
The criminal reportedly held the two shopkeepers for about an hour, threatening them with a gun. However, no one was killed nor wounded, local Midi Libre said.
Special police forces arrived on the scene along with the region’s prosecutor and the city mayor.
According to Montpellier prosecutor Christophe Barret, cited by Midi Libre, the situation is "very calm" and there is no reason to connect the siege in Montpellier with the events in Paris and in Northern France.
People from the surrounding shops were evacuated by the police and the electricity was cut to prepare the police attack to release the hostages, the newspaper reported.
READ MORE: Charlie Hebdo massacre aftermath LIVE UPDATES
The incident in Montpellier has caused a new wave of panic in France as it followed less than an hour after the Charlie Hebdo suspects were killed in Northern France and a hostage siege in a kosher store in Paris, where a gunman was killed. France's Interior Minister has confirmed that "several" hostages have been killed. There have been four deaths reported in the Paris hostage taking.

http://www.artlyst.com/articles/stolen-de-boulogne-sculpture-rediscovered-in-museum-toilet-in-paris
There has been a strange art theft that mirrors the recent attempts to steal another work of art. Le Monde reports that on Saturday, at approximately 4:30 pm, a security guard at Paris's Musée des Arts Décoratifs gave the alert of the disappearance of a Jean de Boulogne bronze sculpture. The artwork depicts Samson and the Philistines, and is valued between €300,000 to 400,000, or £234,000 to £312,000.
The museum immediately closed to visitors, and the remaining art lovers were ushered towards the exit, where they were thoroughly searched. Yet no one was found to be carrying the five-kilogram (11 pound) Mannierist sculpture, made by the Flemish-born, Florence-based artist also known as Giambologna, who was a highly respected sculptor working during the last quarter of the 16th century.
In a surprising turn of events - that mirrors the recent theft of a Medardo Rosso masterpiece stolen from a museum in Rome - the artwork was found that same evening in of all places, the inside of a rubbish bin in the museum's public toilets. The location suggests that upon the discovery of the theft that the not-so-cunning art thief got cold feet, and abandoned the statue before being searched.
The museum, which is located in the Louvre Palace, has a CCTV system installed across its galleries. Members of the French Vandalism Repression Brigade are currently in the process of reviewing the footage to identify the perpetrator. But so far in this case no arrests have been made.
The case seems uncannily similar to the theft and subsequent re-appearance of a rare Medardo Rosso bust, which took place in Rome's Galleria Nazionale d'Arte Moderna last month. In a strange turn of events that are highly reminiscent of the Jean de Boulogne theft and re-appearence, the sculpture has been found, inside a storage locker, at the entrance to the Museum in an area used by the public. This has prompted the police to state that the thief may have had a change of heart. Now it would seem there may be a new trend in testing museum security.

Man accused of stealing £700,000 worth of rare Faberge antiques

Richard Tobin, 45, is accused of breaking in to Christie’s in London and stealing the valuable antiques
A man accused of stealing more than £700,000 worth of rare Faberge antiques from from one of the world’s top auction houses in London appeared in court.
Richard Tobin, 45, is accused of breaking in to Christie’s in London on Sunday December 7 last year.
Items stolen included a jewelled gold Faberge clock, worth £125,000 made in St Petersburg, Russia in 1899, and a Faberge Jasmine flower silver gilt, worth £550,000, as well as other items made by the court jewellers of Imperial Russia.
Tobin, of no fixed address, is also charged with breaking into the offices of financial firm Muzinich & Co, in Hanover Street, Mayfair, two nights earlier and stealing a rucksack and a pair of headphones.
He appeared at Westminster Magistrates Court via videolink from Charing Cross Police Station in central London.
He is charged with two counts of burglary.
Mavis Ramkissoon, prosecuting, said: “Due to the value of the items involved in this case it should be sent to Crown Court.”
Tobin, who was arrested on Wednesday by officers from Westminster CID, spoke only to confirm his name and date of birth.
There was no bail application and no pleas were entered.
He was remanded in custody to appear next at Southwark Crown Court on January 22.
Magistrate Kristen Walker said: “We will decline jurisdiction in this case.”
Addressing Tobin, she said: “These matters are too serious to be heard in this court. They will be transferred to Southwark Crown Court.


Thames Valley Police has released CCTV images of men it would like to speak to in connection with the burglary of an antiques centre in Tetsworth, near Thame.
At 2.40am on the 12th December four men forced entry through the door of the Swan Antiques Centre in High Street and attempted to steal a safe using a strap tied to a rear of a Land Rover Defender, which had been stolen from Horspath.
The safe was not stolen but several display cabinets were smashed and antique jewellery, watches, brooches, necklaces and bracelets were stolen. The Land Rover was found abandoned near Postcombe on the same day.


A RATHKEALE man who is suing magazine publisher Bloomberg for $23m (€19m) has said that an article he claims linked him to the illegal trade in rhino horns has left him suffering “severe emotional, psychological and medical distress”.
Richard Kerry O’Brien has lodged a libel action against the media giant over an article which was published in Businessweek magazine in January of last year under the headline The Irish Clan Behind Europe’s Rhino Horn Theft Epidemic.
The story investigated the global trade in rhino horns, and the involvement of the so-called Rathkeale Rovers gang in this and other criminal activity.
The article, by Adam Higginbotham, made reference to Mr O’Brien whom it described as “the King of the Travellers”.
It also referred to the arrest in the United States of Mr O’Brien’s son, also named Richard, for buying rhino horns. However, Mr O’Brien has denied any connection with the Rathkeale Rovers. In papers filed with the New York Supreme Court, his lawyer states: “Richard Kerry O’Brien has never been a member of, or associated with, any criminal ‘clan’, group, gang, organisation or network, specifically the Rathkeale Rovers. He has never held himself out in his community as the ‘king’ of any group that partakes in criminal activity.”
The lawsuit claims that since the story was published last January, Mr O’Brien “has been subject to much ridicule and scorn”.
“As the public ridicule, embarrassment, shame, hatred and harassment against Plaintiff continues, his despondency over the publication of the article and its impact on his life continues to grow,” it continued.
Bloomberg has this week defended its reporting of the story.

NEW ORLEANS – Hours after a thief strolled out of a French Quarter gallery with a Blue Dog painting worth thousands of dollars, four men found the artwork two blocks away on the street outside a hotel, police said. 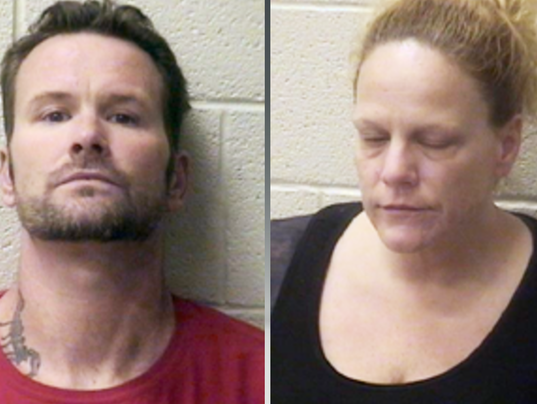 ALEXANDER COUNTY, N.C. -- The Alexander County Sheriff's Office has arrested two people in connection with a series of burglaries in which hundreds of thousands of dollars worth of antiques were stolen.
The Sheriff's Office says the burglaries were reported on December 29; the homeowner reported several items stolen, including an antique silver tea service, several pre-WWII Lionel model trains, assorted jewelry and a US Navy Officer's sword that belonged to a Rear Admiral and winner of the Navy Cross. Authorities say the value of the items stolen is $200,000.
Detectives were able to recover several of the stolen items at a business in Hickory.
The Sheriff's Office charged two Long View residents in connection with the burglaries; Michael Knepp is charged with one count felony larceny, 12 counts of first-degree burglary and 12 counts of conspiracy to commit first-degree burglary. His bond was set at $1,031,500. Knepp was also served with warrants from Mecklenburg and Catawba Counties.
Vickie McPherson is charged with one count of felony larceny and 12 counts of conspiracy to commit first-degree burglary. Her bond was set at $807,500.
The Sheriff's Office says McPherson worked as an in-home healthcare worker at the victim's home.
Posted by Art Hostage at 6:48 pm