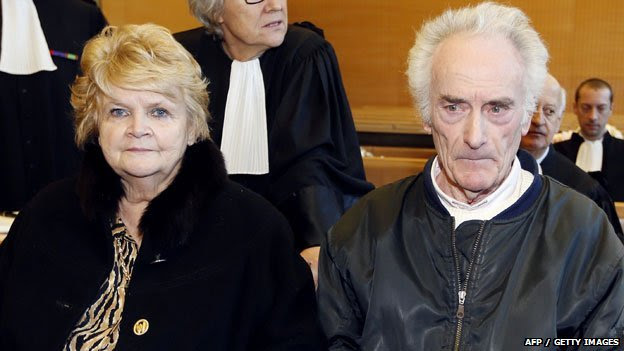 Pablo Picasso's former electrician and his wife go on trial today in Paris, accused of having stolen 271 pieces of the artist's work.
The cache includes lithographs, portraits, a watercolour and sketches created between 1900 and 1932.
Pierre and Danielle Le Guennec say they were given the art, worth 80m euro (£50m) by Picasso's second wife.
The Picasso estate says their account is "ridiculous" and is suing them for illegal possession of the works
Picasso's son Claude has insisted his father would "never" have given such a large quantity of works to anyone.
He told the French daily newspaper Liberation: "That doesn't stand up. These works were part of his life."


The case is shaping up largely as one of “he said, she said” as some potential witnesses have died in the interim and because hard evidence of theft 40 years ago may be hard to come by; furthermore, even the state’s own case doesn’t mention who may have stolen it.


Le Guennec began working as a general handyman at Picasso's estate in the South of France in 1970.
He says that he and his wife Danielle were given 180 lithographs, collages and paintings and 91 drawings in 1970 by the artist's then-wife, Jacqueline. He claims she gave him the works in a closed box containing the works, saying: "Here, it's for you. Take it home".
Danielle recalled that her husband came home with a stuffed bag, and told her that Picasso had given the works to him.
The works, which have never been displayed publicly, were kept virtually untouched in Le Guennecs' garage until the couple decided to put their affairs in order for their children in 2010.
According to Le Guennec's lawyer, he started worrying around five years ago about what might happen to the works after his death.
He contacted the Picasso administration, which looks after works held by his heirs.
In September 2010, Le Guennec travelled to Paris to have the works assessed by the administration.
But within days of art experts proving the works were genuine, police swooped on the elderly pair at their home in Mouans Sartoux, near Cannes, and arrested them on suspicion of receiving stolen goods.
The seized Picassos include a watercolour from his Blue Period, and nine cubist works which experts believe are worth 30m euro (£24.5m) alone.
Also in the collection are portraits of his first wife Olga, as well as a number of gouaches and lithographs.
Mr and Mrs Le Guennec were initially released without charge while an investigation was launched to establish how they had come by the paintings, but eight months later they were formally charged.
If convicted, the couple face up to five years in prison and a 375,000 Euro (£278,000) fine for concealing stolen goods.

Picasso trial: So how did French couple come by £50m art hoard?

Electrician and wife say they were given 271 paintings, collages and sketches as thank-you gifts but descendants of Pablo Picasso accuse them of fraudulently obtaining the haul

Pierre Le Guennec and his wife Danielle Photo: (AP)
A retired odd job man and electrician and his wife stand trial on Tuesday, accused of illegally possessing 271 works by Pablo Picasso.
Six of the legendary Spanish artists’ descendants accuse Pierre and Danielle Le Guennec of hiding the sketches and paintings thought to be worth £50m in a box in the garage of their Riviera home for 37 years despite knowing they were “fraudulently” obtained.
Mr Le Guennec, 75, claims that he was given the collection by the artist and his second wife Jacqueline when he carried out odd jobs for them more than 40 years ago at their Côte d’Azur home in Notre-Dame-de-Vie in Mougins. Picasso died in 1973. Jacqueline committed suicide in 1986.
“(Picasso) often invited me in to have some cake or a coffee. We talked about all things great and small with the master,” he told AFP in 2010. “One evening, I was leaving my work, when madame handed me a little package saying: ‘This is for you’,” he said.

The pieces, dating from 1900 to 1932, include portraits of Picasso’s first wife, Olga, nine highly-prized Cubist collages worth €40 million (£36 million), a watercolour from his blue period, studies of his hand on canvas, gouaches, around 30 lithographs and 200 drawings.
“When I returned home, I saw sketches, drawings – I knew nothing about it. If madame had given me a painting on the other hand, that would have been odd,” he said.
In 2010, Mr Le Guennec and his wife took 175 totally unknown pieces in a suitcase to the Picasso Administration headquarters in Paris, showing them to Claude Picasso – the artist’s son who administers his estate – and asking to have the works authenticated.
Art experts swiftly concluded that not even the greatest counterfeiter could have copied such a wealth of different styles, and there was no way they could have faked the classification numbers on some of them. Soon afterwards, police confiscated the works and launched an investigation.

Picasso's horse drawing
Jean-Jacques Neuer, lawyer for Claude Picasso, said the couple were deliberately vague. “They don’t remember whether they received the ‘gift’ in 1970, 71 or 72. If you are given 271 Picassos, you remember it,” he said.
“You have to imagine that Picasso kept hold of them for 70 years and suddenly decided to give the lot away.”
That did not make sense, he added.
“Picasso signed his works at the last moment, to give them away or sell them.”
All the electrician has to suggest he was close to the Picassos is a signed brochure of an exhibition.

Picasso's dice drawing
"When you give a present, you choose something precise that fits the person. Picasso here is giving away works that have nothing to do with each other- notably extremely precious cubist collages that represent 10 per cent of his production,” he said.
“But also two notebooks of drawings, work tools that he would never have given away.”

Picasso has become the most stolen artist in histoy
“The issue is not whether Picasso was generous or not. Picasso wasn’t someone who was careless about his works; he didn’t give away any old how.”
Charles-Etienne Gudin, lawyer for the couple, said the works came from the artist’s “Grands-Augustins” studio in Paris, and that there was no way the electrician could have stolen them from his final home, which was a “fortress” watched over by two security guards.
The trial is due to last three weeks.
It starts a week after Marina Picasso announced she was selling off a selection of his art work, as well as his famous French villa, for an expected $290m (£190m).
Miss Picasso, famous for her 2001 memoir Picasso: My Grandfather, in which she accused the artist of destroying her childhood, said she is putting at least seven pieces of art up for sale.
The offering includes a 1921 painting called 'Maternite' for $50m, his 1911 'Femme a la Mandoline' for $60m, and a 1923 portrait of his first wife Olga Khokhlova for $60m.
The announcement sent shock waves through the art market amid worries the glut could seriously dent the value of his work.
In modern times, Picasso has become the most stolen artist in history due to his prolific output, recognisable signature and valuable works.
He has more than 1,000 paintings registered as stolen, missing or disputed - more than twice as many as the next on the list.

Charlie Chaplin receiving an honorary Oscar for the lifetime achievement in April 1972 Photo:


"Impeccably informed" thieves have stolen an honorary Oscar awarded to Charlie Chaplin worth at least one million euros (£750,000).
An unknown number of robbers broke into a company in Paris in early January and made off with the 30cm-high, 24 carat gold trophy the British actor received in 1929 at the first ever Academy Award ceremony, Le Parisien newspaper reported.
They also stole a set of pens valued at around 80,000 euros (£60,000) apiece that also belonged to the star of the silent film era, famous for his down-and-out character, The Tramp, and his satirical portrayal of Adolf Hitler in The Great Dictator, his first talking picture.

Charlie Chaplin in 1940 film The Great Dictator (Rex)
The "sensitive case" is being handled with "the utmost discretion" by the "Broc" division, a police unit specialising in the theft of artworks.

"The authors of this break-in only targeted these objects and nothing else. They were impeccably informed," a police source close to the inquiry told Le Parisien.
Police are pursuing all avenues, including the possibility that the theft was carried out by or for a specific collector.

Ringmaster of the wardrobe: Charlie Chaplin in 1928 in The Circus (Rex Features)
Charlie Chaplin only received three Oscars in a career that spanned more than six decades.
The first, now stolen, was for his "versatility and genius in acting, writing, directing and producing The Circus" in 1929.
At the reception of his second honorary Oscar in 1972 for "the incalculable effect he has had in making motion pictures the art form of this century", he received a 12-minute standing ovation – the longest in the history of the Academy Awards. His third Oscar was for Best Score in 1973 for Limelight (shared with Ray Rasch and Larry Russell).
The British actor died on Christmas Day in 1977 at the age of 88.
Posted by Art Hostage at 12:42 pm