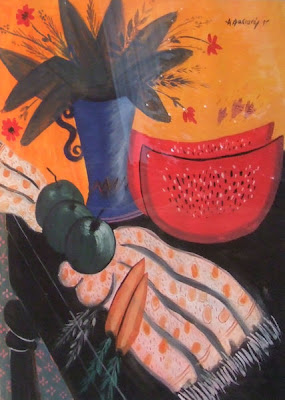 Artless blackmailers rewarded with a sting

Two men have been arrested in Athens on suspicion of blackmailing an art gallery owner over the return of three paintings that were stolen from her in March, police said yesterday.

Officers arrested a 50-year-old man, suspected of stealing the paintings from the gallery in the northern suburb of Kifissia, and a 65-year-old art dealer who contacted the gallery owner and offered to return the paintings for a finder’s fee of 10,000 euros.

The paintings, “Cyclist Wearing a Tie” by Alekos Fasianos and two works by Dimitris Mitaras titled “The Girl,” were worth some 60,000 euros in total.

The gallery owner informed the police and a sting operation was mounted. The three paintings have been returned to the gallery and police found another 17 paintings in the possession of the two suspects.

Two paintings by a leading Welsh artist which are together worth £40,000 have been stolen from a private art collection in the south of England. 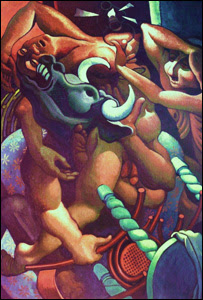 Ed Povey's paintings, Minotaur and Hermaphrodite, above, and Rehearsal, below, were in storage in London and were about to be rehung in a Surrey mansion. 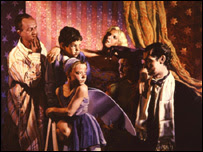 The artist, from Bangor in Gwynedd, said he believed the works may have been stolen to order.
Metropolitan Police are investigating and auction houses have been alerted.

Mr Povey said the two stolen paintings were being kept in a storage facility in North Acton, London while the mansion where they were destined to be hung was refurbished.

The art collector, who does not want to be identified, said this: "Is a sad loss of two special paintings.

"Both are quality art and I really hope that the thief appreciates just how good they are."

"We are not certain when they were taken, but the police were alerted on Tuesday, after the discovery was made," said Mr Povey.

"A piece of 17th Century French furniture was also taken."

"It's a great shame. Minotaur and Hermaphrodite was a great favourite of the owner and was due to be hung in his personal study in the mansion," said Mr Povey, who divides his time between north Wales and America.

He said the two paintings were included in more than 40 of his works in the large private art collection in Surrey, and they appeared to have been specifically targeted.

"Unfortunately, if they went into a private collection - there's very little chance of finding them," he said.

Mr Povey, who rose to fame in the 1970s for the many multi-storey murals which he painted in Wales, England and the Middle East, said the Metropolitan Police were investigating.

He also said the art department of Interpol had opened a file on the case, and Sotheby's, Christie's and Bonhams were watching in the hope of stopping the art thieves if they attempted to auction the paintings.
Art Hostage comments:

First of all, the Greek guys arrested were caught because of their sheer greed.

Instead of selling the stolen paintings within the underworld for around 2-3,000 euros, they got greedy and tried to sell them back to the owner for 10,000 euros.

Remember the Moronic second hand car dealer who tried to sell the three paintings back to the insurers, and never collected the £50,000 reward offered because of his own stupidity?

Back story, below, read all three to get up to speed

Well, how about if this person and his colleague have started their revenge by organising this art theft, with others to follow?

How about as a sick follow up, this revengful pair organise a burglary at the Surrey Mansion where these paintings were destined for?

There is another 40 pictures, plus other fine art to steal.

These thieves have information about the destination, address of the Surrey mansion, perhaps because of an inside job, they now, thanks to this news report know there is another 40 valuable paintings sitting there waiting to be targeted.

However, the thieves may already know of the art in the Surrey mansion because of another type of inside job.

Shame Police will just issue a crime number and move on.

To be continued, watch this space !!