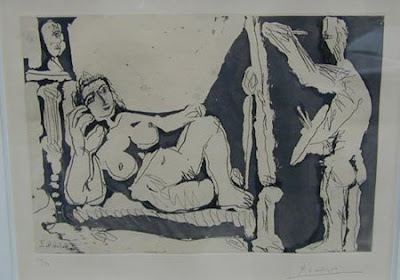 Police said on Thursday they arrested Edmilson Silva do Nascimento, a 29-year-old bakery manager, at his home on Sao Paulo's east side on Wednesday night.

They found two of the stolen pieces, both the work of Brazilian artists, under his bed -- a print titled "The Couple" by Lasar Segall (1891-1957), and the painting "Women in a Window" by Emiliano Di Cavalcanti (1897-1976), one of Brazil's most renowned painters.

Together, they are worth about 1 million reais ($633,000), according to the Sao Paulo state Culture Secretariat.

The works were stolen on June 12 by three armed robbers, who calmly strolled into the Pinacoteca Museum and held security guards at gunpoint while they completed the heist.

They also made off with two prints by the late Spanish artist Pablo Picasso -- "The Painter and the Model" from 1963 and "Minotaur, Drinker and Women" from 1933.

Police arrested a suspect last month when they recovered "The Painter and the Model." A third suspect, who is believed to be in possession of "Minotaur, Drinker and Women," is still at large.

The robbery marked the second time in less than a year that works by Picasso were stolen from museums in the city. In December, his "Portrait of Suzanne Bloch" was snatched from the Sao Paulo Museum of Art along with "The Coffee Worker" by Candido Portinari, another prominent Brazilian artist.

(Reporting by Marjorie Rodrigues; writing by Todd Benson; editing by Mohammad Zargham)
Art Hostage comments:
-
Told you they were local.
Posted by Art Hostage at 4:28 pm