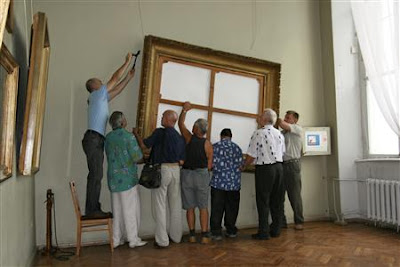 Ukraine laments theft of a Caravaggio from museum
http://www.reuters.com/article/lifestyleMolt/idUSL141835820080801?pageNumber=2&virtualBrandChannel=0
ODESSA, Ukraine (Reuters Life!) - Art experts in Ukraine on Friday lamented the theft of a work by 17th century Italian artist Caravaggio from a museum, describing it as a cultural catastrophe for ex-Soviet states.

Staff at the Museum of Western and Eastern Art in the Black Sea port of Odessa discovered the painting, called the Taking of Christ, or the Kiss of Judas, missing, cut from its frame when they arrived at work on Thursday.

As the museum had been closed the previous day, the thieves could have struck any time from Tuesday evening.

Police said they entered through a window, bypassing an outdated alarm system by removing a pane of glass rather than breaking it. They then escaped across the museum's roof.

"This is a cultural catastrophe, a national tragedy. There is so little of art of such level in the former Soviet Union," said Vitaly Abramov, deputy head of a second museum in the city, the Odessa Art Museum.

"You cannot put a price on this and I am not talking about money here. It is, in every sense, priceless."

Auction houses in London declined to give a valuation of a Caravaggio.

Television pictures showed the window where the thieves had entered, its alarm disabled and its frame in bad repair.

"We came in here to find that the wind was blowing the blinds around through a window with no pane," Lyudmila Saulenko, the museum's deputy director told reporters.

The painting had been bought by a Russian ambassador to France and presented as a gift to a Russian prince before being turned over to the Odessa museum last century.

Doubts had been expressed about the painting's authenticity, but Soviet art experts in the 1950s confirmed the work was in fact by Michelangelo Merisi da Caravaggio. It underwent restoration work in 2006.

A version of the same painting by Caravaggio hangs in the National Gallery of Ireland in Dublin.

News reports said city police had been urging the museum to update its alarm system, dating from the mid-1990s, but the suggestion was turned down on financial grounds.

"Thefts, of course, do occur in great museums like the Hermitage (in St Petersburg) or the Louvre (in Paris)," Abramov said. "But the answer is to put in a truly effective alarm system and not postpone this."

Art News Blog and I had fun with this story. He posted the wrong painting. I posted the right one. Then he posted the one I'd found as well. (Two original versions.)