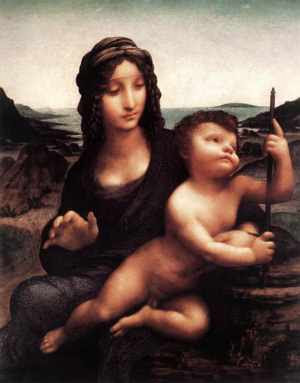 Trial date for da Vinci accused
http://news.bbc.co.uk/1/hi/scotland/glasgow_and_west/8314509.stm
Five men facing extortion charges over the recovery of the Leonardo da Vinci masterpiece Madonna with the Yarnwinder are to stand trial next year.

The artwork was found in Glasgow in 2007 - four years after it was stolen from Drumlanrig Castle, near Thornhill, in Dumfries and Galloway.

At the High Court in Glasgow, Lord Kinclaven set a trial for March 2010.

The case against the men - three from Lancashire and two from Scotland - is expected to last for up to six weeks.

Marshall Ronald, 53, Robert Graham, 57, John Doyle, 61, all from Lancashire, Callum Jones, 44, from Renfrewshire and David Boyce, 52, from Lanarkshire, were all excused attendance during Monday's hearing.

The painting, which has a value estimated at £30m, has been in the Duke of Buccleuch's family for two centuries.

Depicting the Madonna with the infant Jesus holding a cross-shaped yarnwinder, it is believed by experts to have been painted between 1500 and 1510.
Posted by Art Hostage at 2:43 pm