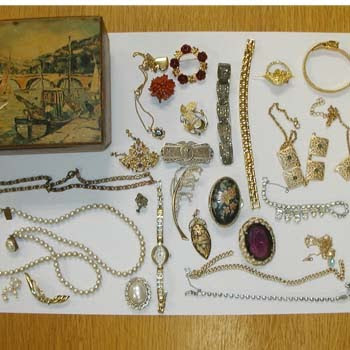 THE largest haul of stolen jewellery recorded by Lothian and Borders Police has been recovered during a series of raids.

Police have begun the mammoth task of identifying the rightful owners of £150,000 worth of high-value rings, necklaces and ear-rings.

The collection, which contains many unique, unusual and antique pieces, is thought to have been stolen from houses around Edinburgh in the past two months.

One item alone, a small diamond set into a smooth silver ring, has been estimated to be worth more than £30,000. And another, a gemstone ring with an unusual fitting of two small silver monkeys, is thought to be a family heirloom.

Police said the jewellery, which also includes high value rings, necklaces and earrings, was recovered recently at a number of addresses in Edinburgh and Glasgow.

No-one has yet been charged in connection with the find.

Police are now looking to reunite the allegedly stolen items with their owners, and they are appealing for anyone who has had jewellery stolen over the past two months to come forward.

Sergeant David Brady, of the central intelligence team in Edinburgh, said he expected most of the pieces to be returned and appealed for anyone who has had jewellery stolen to come forward.

"This is a very unusual find, as we do often recover high-value items. I cannot remember the last time we recovered so much jewellery," he said.

"Many of the pieces appear to be family heirlooms or antiques, and there are some very striking items in the collection.

"Obviously we hope that will make it easier to return these items to their rightful owners.

"The highest value piece is a small diamond ring worth around £30,000, but we would expect many of the items to be of immense sentimental value to their owners.

"While we cannot say for sure where all of the items have come from, we believe they have been stolen from addresses in Edinburgh over the past two months and so anyone who has had jewellery stolen should get in touch."

He added that officers would be looking for proof of ownership, such as a photo of the item or a receipt, before they would return the jewellery.

Anyone who has been the victim of jewellery theft should contact Lothian and Borders Police on 0131-311 3131 with a description of the stolen item
Posted by Art Hostage at 4:50 pm