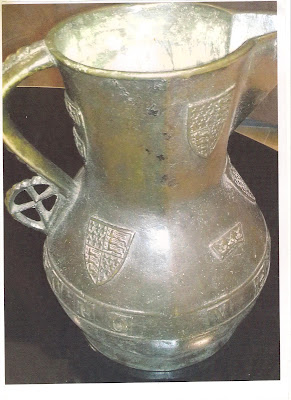 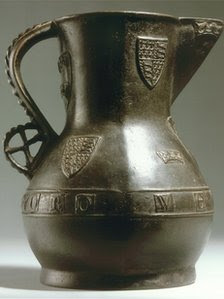 The Wenlok Jug was taken from a museum in Luton

A 14th Century Wenlok Jug worth £750,000 that was stolen from a Luton museum, has been found, police believe.
The jug was taken from the Stockwood Discovery Centre in Luton on 12 May, but has turned up in Surrey.
The bronze creation is decorated with coats-of-arms and inscribed with the words "My Lord Wenlok."
Bedfordshire Police said experts from the museum are due to examine the jug to determine whether it is the genuine article, on Wednesday.

Following an in depth investigation the jug, which was valued at £750,000, was discovered at a property in Tadworth, Surrey, in the early hours of Monday morning. Two people were arrested at the location. One man, 23-year-old Ronald Nash, has been charged with handling stolen property and will appear at Luton Magistrates Court today. The second has been released on police bail pending further enquiries.

It is thought the jug was made for either William Wenlock, who died in 1391 and was canon of St Paul's Cathedral, or his great-nephew John, the first Lord Wenlock, who was a major figure in the 15th Century.
Temporary export ban Of two people arrested in connection with its theft, the force said one has been charged with handling stolen property and the other has been released on bail.

Det Sgt Barry Townson, who is investigating the burglary, said: "We are, of course, delighted that the jug has been recovered and will be returned to its rightful home but the investigation continues into how it came to be in Surrey and who was responsible for the burglary. I would like to re-appeal to anyone with information about the burglary to come forward."

The jug was stolen during an overnight break-in over a weekend in May. A £25,000 reward was offered and the case was featured on the BBC's Crimewatch programme.
A Stockwood Discovery Centre spokesman said: "We are thrilled that the Wenlok Jug has been successfully recovered and would like to thank Bedfordshire Police for their diligence and hard work over the course of the investigation. We look forward to this irreplaceable piece of local history returning to Stockwood Discovery Centre and the community of Luton."

In 2005, the jug was nearly sold abroad, but a temporary export ban provided the opportunity for Luton Museum to raise the £750,000 needed to buy it.
Update:
The rare historical artefact was stolen in a smash and grab raid from the Stockwood Discovery Centre, Luton, in May but found in a garage lock up in Tadworth in Surrey after police raided a nearby house.

Apart from some minor abrasion on the jug’s spout and a few scratches and marks on its main body, the artefact seems to have been returned relatively unscathed and Ms Perkins says that no restoration work will be carried out on it as the theft has become part of the history of the piece.

Det Insp Martin Peters from Beds Police said: “An extensive police operation has been under way to recover the jug since it was taken in May and we executed some warrants in Tadworth in Surrey in the early hours of Monday morning. Two people were arrested and the jug was found in a lock-up garage nearby. One of those people has been charged with handling stolen goods.” 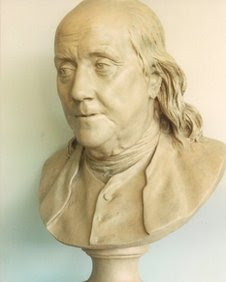 The bust may have been cracked on the breastplate

A rare bust of US founding father Benjamin Franklin has been found nearly one month after it was stolen from a home in Philadelphia, Pennsylvania.
The $3m (£1.8m) piece was recovered when police arrested a cleaner who had worked at the house it was taken from.
It was stolen on 24 August from a stand in the living room of a home in the affluent neighbourhood of Bryn Mawr.
The sculpture is one of three known to have been made in 1778 by Jean-Antoine Houdon when Franklin visited Paris.
The FBI confirmed Friday's arrest of Andrea Lawton, 46, and the recovery of the bust, which is 28in (71cm) tall and weighs 25lb (11kg).
Ms Lawton, who reportedly had the sculpture in a duffle bag, was arrested after getting off a bus to Elkton, Maryland, from her hometown of Mobile, Alabama.
According to court documents, the suspect, also known as Andrea Gresham, faces charges of theft, fraud and interstate transportation of stolen property.
She is due in court on Wednesday for a bail hearing.
Ms Lawton was fired on 21 August from a cleaning company that worked at the home of a lawyer, George D'Angelo, Reuters news agency reported.
Employees saw her three days later driving away from the property in a vehicle.
Mr D'Angelo, 85, said he believed the breastplate of the sculpture was cracked, but had not been able to check the work of art because the FBI was testing it for fingerprints.
"I think it can be repaired," Mr D'Angelo told the Associated Press. "I hope so. It would be ghastly if it can't."
Posted by Art Hostage at 9:31 am