Historically, British Police are the Cream of British Society, "They are White, Thick, and Rise to the Top" !! 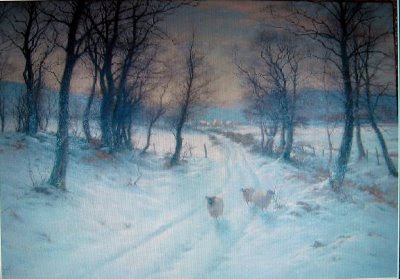 The media have been mistaken as to the painting stolen from Bourton-on-the-Water in Gloucestershire. Last week, I wrote about the theft of a Joseph Farquharson from a private residence. I posted an image of the painting, but I posted the wrong painting because The Herald incorrectly stated the name of the painting. I received a kind email from Grizelda Graham, daughter of the 89 year-old theft victim. She wrote , "We don't know why the media have entitled our stolen painting 'sunlight and shade' - the title on the back of my painting is 'where snow the pastures sheets.' It is very beautiful, and we are keen to publicise its theft widely in the hope that someone will spot it and return it to us." This is the image of the stolen painting she gave me.

Hopefully the media will correct their mistake soon, and continue to publish the theft. I suggested she contact the Art Loss Register in her attempts to get the painting back.

Way to go Derek, good story, glad you have put the record straight.

Only problem is the Police are using a classic tactic about revealing the wrong title and image for the picture and allowing the thieves to think they have got a picture that will pass through the trade because the one listed is incorrect.

Before you revealed all, Police were hoping the picture may turn up because of the deliberate mistake.

Now the thieves/Handlers are aware of the correct listing the painting will go further underground, unless a dealer bought the picture thinking he could make a fast buck, or a dealer has paid good money for a previously unlisted picture and perhaps this dealer may want to hand it back.

However, to smoke out the current person in possession of 'where snow the pastures sheets.'

Grizelda Graham should consider offering a reward and then can get authorities to waive conditions, the dealer may come forward with the painting.

Furthermore, as outlined below in previous articles the strict conditions of paying a reward make it impossible for the money ever to be paid in reality, the 2002 proceeds of crime act prevents rewards being paid.

Until then Grizelda Graham, I am sorry to say, "Don't hold your breath"

The British Police are the Cream of British Society, they are mostly: